The delicate, ambient vignettes on Ryan Ferreira’s  solo record, ‘music for images’ belie his early interest in bands like Tesla, Skid Row, Poison, and Motley Crue. These reverb-drenched miniatures reflect his interest in film music, lasting no longer than they need to get the emotional job done. Here he relates how his music developed through experience and solitude.

I started playing mostly the music my parents were into. My dad was into rock (Queen, Jeff Beck, Jimi Hendrix, etc.) and my mom was into music like Don Henley, Tears For Fears, Michael Jackson, Huey Lewis, and Lionel Richie. I can remember really liking Joe Satriani, Steve Vai And Eric Johnson, then Guns N’ Roses, Tesla, Skid Row, Poison, Motley Crue, and then Pearl Jam, Soundgarden, Nirvana, Primus. At some point my parents got me an Allan Holdsworth book that came with a cd. After that I started getting more into improvised music through guitarists like Wes Montgomery, Pat Metheny, John Scofield, Bill Frisell, and later hearing David Torn, Rafael Toral and Fennesz.

The music on music for images comes from a collection of pieces I recorded over the last three or four years. Most of the pieces were done during an artist residency in the Southwest. Leading up to that, I had been in New York for eight years and hadn’t been away for longer than ten days. The Taos [New Mexico] trip was the first time I was away for a long stretch of time, and the only goal in mind was to record music. That was the first time in my life that I was able to just be in one place where I could get up and record solo music everyday for months.

These days I’ve been trying to get out and hear more of my friends play. Mt. Varnum had a wonderful debut performance recently—it gave me goosebumps. Seeing My Brightest Diamond live was also pretty fantastic—such energy. Lately, I’ve also been into Jesca Hoop with Blake Mills, Fleet Foxes, Celer, Jost, and Sam Amidon’s music.

In the last two years or so I’ve been put in a lot of situations (musical and non-musical) that have made me feel like I’m growing. I think because of that, when I come back to the instrument, it makes me feel more comfortable with what I’m contributing, so it seems like it’s more about something that I’ve experienced and not so much something that I practiced.

Maybe a sense of calm; there’s something that Rothko said that could apply: “Paintings are just a doorway to leave the world in which they were created.” I think I spend most of my days sort of feeling that, or trying to.

I used a ‘96 Parker Fly. It is my main guitar, although I’m starting to play a ’60’s Fender Mustang with a few bands now. It belonged to my dad. On one track I used two amps: an early ’90’s Peavey Stereo Chorus (that I got in fifth grade) on the right side, and on the left side a 1981 Mesa Boogie Mark IIB. For the effects, (track 4110) I was probably plugged into my tuner, followed by an overdrive that wasn’t on, into two Line 6 reverb pedals. There’s three or four other tracks on the record that were done on my old recording setup which was a DIGI 001, and for those I was plugging in direct and using a few plug-ins. The rest of the record was recorded direct into an Apogee Duet with no pedals. The plug-ins that I use are the reverb and delay that come with Logic.  For the most part the mix on the pieces on the new record are uncompressed. It’s not EQ’d very much either—even in mastering. It’s really just the sound of the guitar going in.

I feel like recording has just become a part of my day; it feels like habit. Not in a negative sense, but in the regularity sense—I enjoy that. It’s a way of composing; a way of getting down ideas. There’s such a different feeling when you’re playing in front of people—whether it’s solo, duo, trio, or a bigger group. I’d say I enjoy recording more, but I enjoy both of them for different reasons. My personality sort of leans towards being on my own, home, working on music. 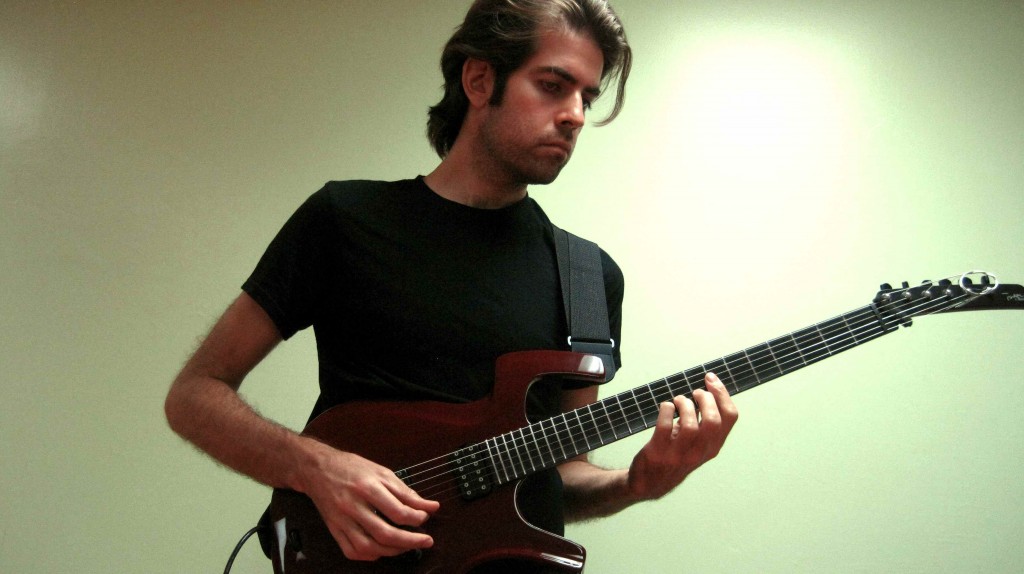 The people that seem to enjoy or get something out of what I do are mostly my friends. I haven’t had any adverse reactions yet! I’m working now to get the word out about the solo music, and have been playing more solo shows.

I’ve been working on scoring films and feel like the solo music is a good fit for images. Hopefully, at best, it’s the kind of thing that you notice when it’s not there. I’ve done a few scores, but would like to keep going and get other friends/musicians/instruments involved—move away from just the sound of the guitar.

I’m involved with different projects around New York, but I’m mostly trying to focus on my solo music. I released the record myself on cd. I like making the connection with the person when I hand it to them, or taking it to the post office and mailing it to them. The record is all hand done; the tracks /credits (mastering/disc design) are hand written. I’m not into the idea of people downloading it and listening to it on their laptops or smaller speakers. If I could have, I would have released it on vinyl, to give it more of a chance of being heard on a real stereo system. If I can hand someone a cd, I think there’s a better chance of them listening to it on their stereo than if they download it. Anyone in the world can go here and order the record.

Leave a Reply to A. Vicki Snure Cancel reply