I discovered Oleg Shpudeiko a/k/a Heinali through Miguel Copon’s terrific site, Prepared Guitar. Shpudeiko is a Ukrainian guitarist and composer who does amazing soundscapes with minimal gear. Here he describes the gear and his evolution as a musician and composer for Guitar Moderne.

I never became proficient. It was my first real musical instrument, but I use guitar as a sound object, and am not sure that I want to become proficient. I started in 2003 with purely electronic music, without any musical education. After a few years, I felt the need to learn basic music theory and master an instrument, at least on a basic level. I chose guitar, in part, because it was relatively cheap (a friend of mine sold me his old Ibanez, which I use to this day and is my only electric guitar) and easy to transport to live shows. Back then, I used it to record solos for my electronic tracks. 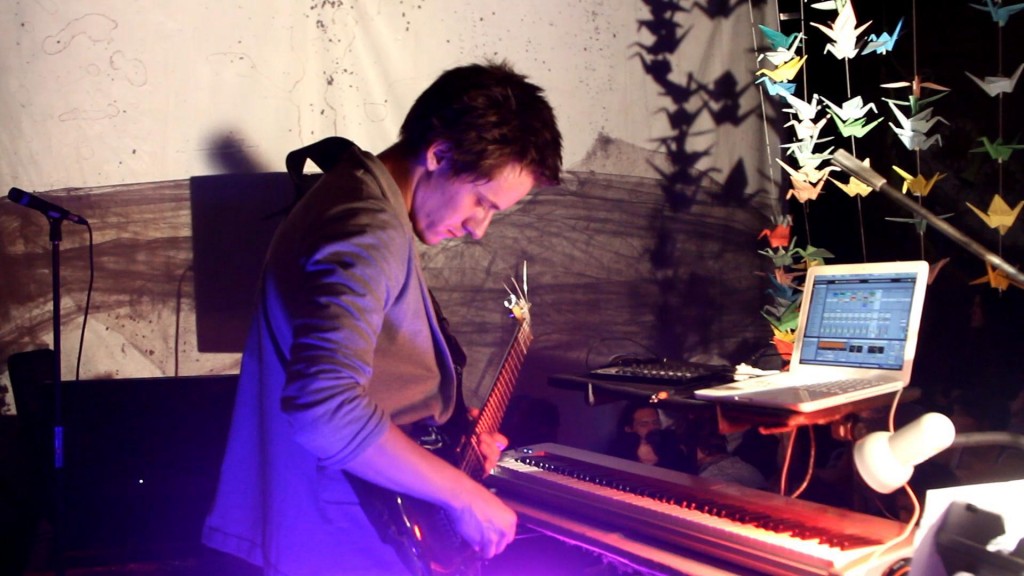 I have a pretty weird stylistic background: I used to try almost every genre during my early years, I made lots of crappy recordings, from noise and power ambient to new age, downtempo, and even dubstep.

I wouldn’t accentuate “experimental” because I don’t see myself interested in a particular kind of music, it’s all just music to me. I still sometimes write more mainstream music and enjoy it as well. It’s true that what I’m currently doing isn’t popular at all, especially here in Ukraine. Music that interests me changes; I understand better what is important to me. Maybe it’s because I’ve never had musical education that I feel like I’m floating around—in contrast to being rooted in a certain tradition like a classically trained musician. I had no reference point during my first years of tinkering with sounds. Everything was new for me; I had no ideas about music history and tradition, only a couple of reference points represented by some music projects that I loved.

Things are a bit different now, especially after the last couple of years of working on Blook projects (an electroacoustic duo formed with classically trained composer and pianist Alexey Shmurak). As Blook, we explore interdisciplinarity, actively collaborating with different artists. It’s difficult to understand context when you’re inside of it; this kind of collaboration enables me to achieve a certain distance from my own music and myself. It can act like a kind of mirror by demanding a translation or interpretation of the language of artists working in other media. Of course, my interest in music, and understanding of it, is highly influenced by other ideas, both in music and texts, and this leads me to the next question.

I found that different music inspires me in different ways. For example: the effect William Basinski and John Luther Adams (Dark Waves and Become Ocean in particular) create is very different from works by John Cage; sometimes it feels like a different art form. Some music is a painting, some is a story, and some is a tree.

I’m also inspired by artists, contemporary art, abstract expressionists and Mark Rothko in particular, to the point where not long ago I started working on my own color field technique. This involves extensive layering of simple sound loops in order to create a complex musical texture. I incorporate this in my current live shows and plan to release an album next year that explores color field.

I don’t have an answer because I don’t think I have a specific style and I’m not sure whether I’m getting better (or worse). I start to hear more and paying attention to details I’ve never noticed before. Sometimes, these details might become the point that interests me the most. I feel I’m more attentive, but I’m not sure it actually makes my style (whatever it is) or my music better. I found it is very helpful in cultivating this kind of attention to kick myself out of my comfort zone and look for art that challenges me, intellectually and emotionally. I found the more I do so the less I demand from the work of art and the more attention I pay to what it actually is—not what I want it to be. This leads me to your next question. 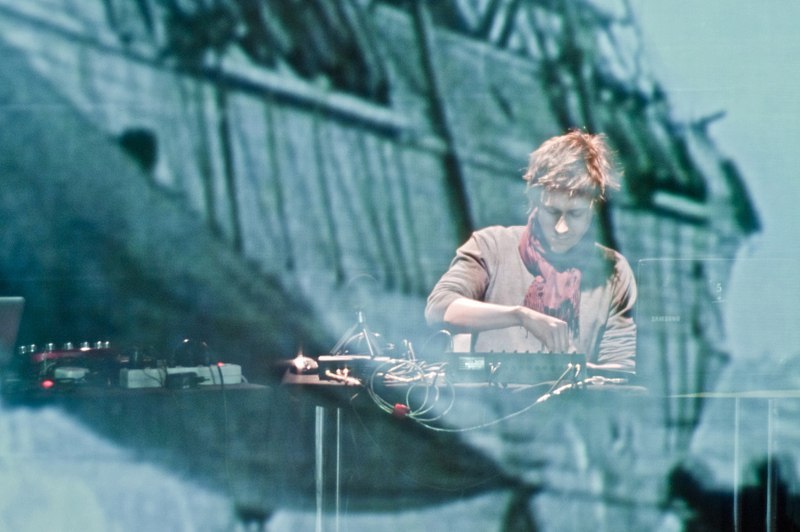 Right now I’m not trying to convey something with my music. A couple of years ago, I understood music as a very abstract language, which enabled me to communicate ideas and states/feelings that I couldn’t or wouldn’t want to transfer by other means. But I became more and more fascinated by the language itself. I find the less violence I apply to sculpting it into something that will express what I want it to, the more I begin to discover what is hidden when blinded by egotistic intentions. I discover that it can live by itself, without participation from my side, and it’s so much more beautiful and complex than anything I could have built. I try to organize some sort of space for music to explore, applying modifications to this space, not the music itself. This doesn’t mean, of course, that I discard other music, especially the narrative based music. It’s just I’m in a search of balance between forcing the sound into what I want it to be and leaving it absolutely free. That said, beauty is extremely important for me. My understanding of beauty and things I find beautiful changes over time, sometimes drastically, but the presence of beauty is essential.

A nerdy question, at last!

I don’t have a guitar amp (though I will probably get one someday) since most of the time I want a clean signal. I plug directly into my RME Babyface (nice clean preamps). Sometimes I use Max/MSP on my laptop, though I did a couple of shows without a laptop and it felt just right. I use the MF Drive as a filter, boost and overdrive—an excellent tone-shaping tool. In addition to using the delay function, I use the MF Delay for slight pitch variations by moving the Time knob. I love its feedback; sometimes it creates nice pulses. Occasionally, I don’t even touch my guitar; I just layer MF Delay feedback with the looper.

The Ditto is the main part of my setup because my technique often involves huge amounts of layering. Ditto x2 has reverse and half-speed effects I use a lot too. As for the guitar, sometimes I use basic preparation techniques and sometimes I use it as is. I really miss my crackling tone pot; I replaced it a couple of weeks ago and shouldn’t have—I feel like I’ve lost a tiny but wonderful instrument. Occasionally I employ my classical guitar or upright piano, which I mic with my trusty Cold Gold contact mics. For recordings and commercial work, I use Cubase 7 and its native tools, which I think are really good. I’m also thinking of getting Moog MF Trem and, maybe, a second looper.

I enjoy improvising more, but it’s not a radical difference. Studio work can be fun as well. As someone who was self-taught, I began my affair with music without any background—everything was improvised. I discovered every new thing, no matter how basic and well known by an educated person, experimentally (resulting in a series of naive revelations). After years of practicing and studying music, I still do everything pretty much this way. When I touch guitar, or synth or Max/MSP, I want to be surprised; I want the same revelatory experience as when I started tinkering with sounds. I want the intense experience that got me into making music and made me choose the hell of doing music professionally. Improvisation makes that possible. I found no matter how much experience you have, you always find unknown territory.

I can’t answer “playing live” because I have rarely had a positive experience in Ukraine, except for a few “academic music” audiences, who usually listen quietly and attentively, even if they don’t like the music. Only a few people are interested in what I’m doing here and come to my concerts. That’s okay, we just don’t have a scene or a culture for this kind of live music. Unfortunately, I play live rarely: this year I had only three shows. I’d love to play more, but that probably means I’ll have to get out of Ukraine. 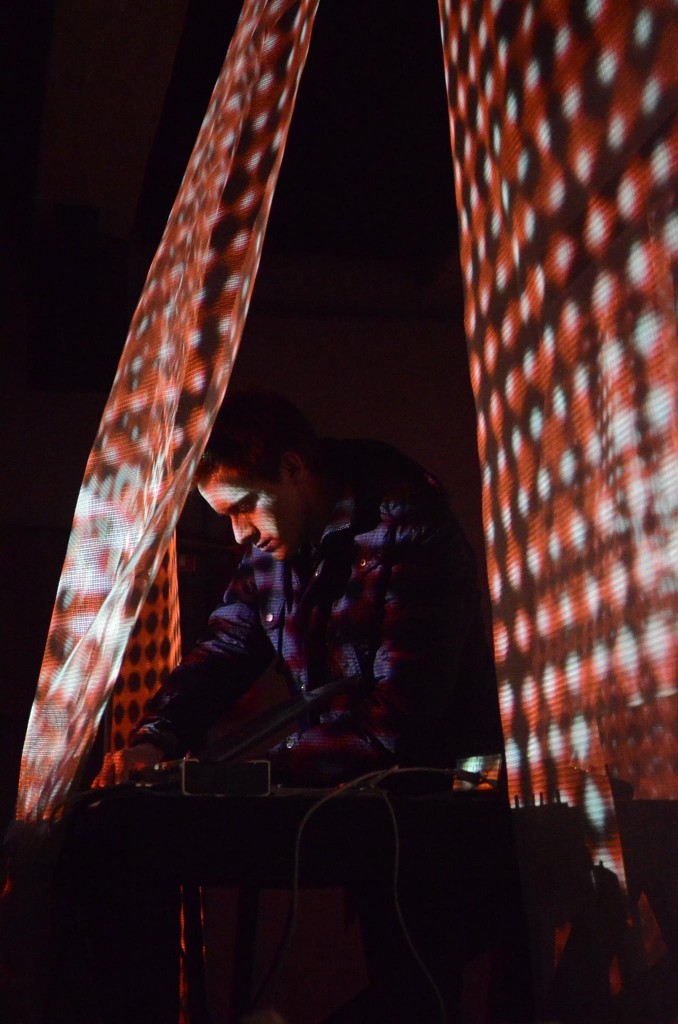 Thanks to the Internet—Facebook, Soundcloud and YouTube—I have a small, but very good, audience in other countries. Some of them have followed me for 5-7 years, even though my music has changed a lot (and will probably change even more). I’m extremely grateful for their attention. I tried promoting my music a couple of times but I just don’t have enough time; I would rather work on music or read a book instead—plus, I hate aggressive promotion.

Pretty much every contemporary listed in my influences, and many more.

I have a couple of projects I am working on simultaneously. One is music for choreography: A Thread, by Jean Abreu. It had public screenings in the UK and, if I’m not mistaken, it will be premiered in 2015. Another is a new Blook project in collaboration with Dariiya Kuzmich, called Idleness. It is the biggest thing we’ve done. It features live music, theatrical elements, performance and video art. It is already developed; we’re looking for a platform to present it in the middle of 2015. My new LP is recorded and hopefully will be released next year. I’ll finally have a release, which will represent my current music. Previous ones were released a couple of years after the recording, or not at all because I couldn’t find a label and couldn’t afford a physical self-release. You can hear my music on Soundcloud and Bandcamp.