Listening to the throbbing, minimalist soundcapes on Noël Akchoté’s record, Rien [Winter and Winter] did not prepare me for the bluesy, rooted, jazz guitarist I later saw performing with the Big Four (Max Nagl, Steven Bernstein, Bradley Jones) at the Austrian Cultural Forum in New York. That Akchoté straddled the ground between Derek Bailey and Freddy Green with aplomb, throwing in the occasional Muddy Waters raunch and Bill Frisell offbeat elegance where appropriate. Here, the French guitarist explains how he doesn’t hear the distinction among those legendary players that others might.

I come from jazz, early jazz. I started guitar at eight years old, first in my district conservatory with classical guitar, the usual roots: Carulli, Sor, Ségovia and others methods and études.  But I soon got to hear some jazz and felt absolutely fascinated by the style, and by some particular players like: Barney Kessel, Herb Ellis, Jimmy Raney, Tal Farlow, Pat Martino and many more. So I moved on to more specific lessons, in a private school from Paris (Paul Beuscher), and soon attended a summer master class where I actually had the chance to meet, study and play with Tal Farlow, Philip Catherine, Mickey Baker, Luther Allison, Christian Escoudé, Dave Liebman, John Abercrombie, Barre Philipps, etc. In the mean time I had never stopped to listen to all the other guitarists I liked in other genres, like Baden Powell, Johnny Guitar Watson, Keith Richards, BB King, Chuck Berry, Muddy Waters and others.

There’s a quote from Derek Bailey I like a lot, where he says, “Improvising is more playing per cubic meter.” And maybe that’s how and why I first started to explore such areas some 20 years ago. Also, in the early 90’s, I felt contemporary jazz was a sort of dead-end: increased technical ability among the new players, but losing a lot of the story to it.

I don’t divide so much mainstream/nonmainstream, maybe because I have experience in both for so long, and also because I listen to each player, more than to genres. I mean, artists like Derek Bailey for example, are usually attached to improv, but you could easily relate them to classical guitar, or early jazz guitar: George Van Eps, Dick McDonough, George Barnes, etc.

I have a lot of examples, where so and so reminds me of other players in previous styles and times—not just the scene they supposedly belong to. A simple example: I see Arto Lindsay, because of his rhythmic playing, closer to Freddie Green than to another avant-garde player; the same with Robert Quine, who for me seems to embrace the whole history of guitar rather than being just a “punk” soloist.

I could easily say any guitar player, I love them all, learn from all of them, but to be more precise I have had some specific major influences, ever since an early age, and most of them remain today: René Thomas, Johnny Guitar Watson, Robert Quine, John Fahey, Jaco Pastorius, Bill Frisell, Baden Powell, Cornell Dupree, John Abercrombie, and many more.

More recently: Adam Levy, Manuel Mota, and Pascal Montheillet. That is just guitar, because my inspiration comes a lot from people I work with, beyond just music, but also in cinema, writing, cooking, and more.

How did you get at better your current style?

In fact I’m still learning everyday, I am a permanent student and I think it’ll never end. But yes, I have learned some things through all those years of playing and practicing. That would take us into how to practice, and what it affects one’s playing, and that’s a pretty complex and wide area.

First, I have a tendency to be interested in absolutely all types of music and playing, so when I go deeper into the guitar, I almost systematically try to look for something I don’t know yet, or know very little about. I consume a lot of written music, scores and transcriptions, generally starting with some unfamiliar techniques, or something opposite from my natural way of playing; this makes me think. For example: I spent the last couple of years reading a lot of classical guitar music from the various repertoires, paying close attention to all the fingerings, positions, etc., even though I have no plans to use the classical positioning of left nor right hand. 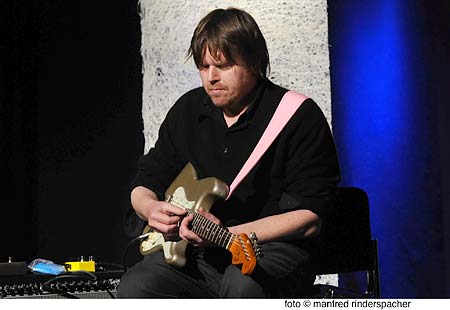 I think after so many years and experiences that I came to a point where I don’t really ask myself such questions, all I can offer is to continue this life-line I started with new developments, new territories, encounters, interests, and so on. There are clearly some main subjects in my recordings and playing: often a cinematic or orchestral approach to music. An historical element too, and a passion for the guitar through all its époques, genres, moments.

My usual rig for solo performances is a Fender American Vintage ’52 Telecaster (Butterscotch Blonde), with Ernie Ball Regular Slinky .010-.046, or Daddario XL Pure Nickel .010-.046 strings. I use Fender triangle picks shell Heavy or Xtra Heavy, and Fender Premium Platinum Acoustasonic or Vovox cables. Other pedals include: an Electro-Harmonix Deluxe Memory Man (in Stereo), an MXR Distortion Plus, and, depending on contexts and program, a Boss TU-3 Chromatic Tuner, and two Fender Twin Reverb (sliverface), with working Tremolo, and, as often as possible, master volume knobs.

For recording I use an Apple MacBook Pro 13″, running Logic Pro 9 or Garage Band, Waves Platinum, IK Multimedia Amplitube Fender Amp, and IK Multimedia Tracks software. I use a Neumann TLM 103, or an Audio Technica AT 2020 USB mics. I also use a ZOOM H4N portable Digital Recorder.

To me one feeds the other, sometimes studio is like a laboratory or a magnifying glass, and sometimes live playing takes you someplace you might not have gone in studio. I enjoy both and need both, but it all depends on the project: some music needs to be precisely recorded first, to be possibly remolded live, and in other cases (like the Gesualdo’s Madrigals Album) some recordings are close to impossible to take on stage. So really I would say a good balance of the two is the best.

I always played in a lot of very different contexts, from modern jazz to free improvisations, live electronics to contemporary music, post rock to pop, soundtracks to drone and etc., so that years after years I feel people got to see each time a different side of the same approach. I work in many fields but more or less drawing the same picture, and I think this today is much more obvious for many people. But playing all those genres and areas also helped me be audible and visible to other audiences that may not have come first to a previous or specific scene and music.

In the last 30 years or so of playing constantly, I have played with my heroes, far more that I would ever have expected or dreamed about when I started, so today such dreams are different: I’m not so much looking to play with some people I admired through records or live shows, but rather to encounter people I have no clue about. This often means pretty radical new areas to explore, like, in recent years, Baroque guitar, Lute, Theorb, Klezmer (as I am often in Cracow, Poland), or any genre I haven’t explored yet. I was regularly in Lisbon, Portugal this past year, and couldn’t resist getting a Portuguese guitar there, listening a lot to Carlos Paredes, Jaime Santos, and many others.

In the last two years I recorded and released a lot of albums (including a huge archive series of previous live recordings with various groups), all available as MP3 downloads on most usual sites (like Amazon MP3 Downloads or iTunes), like:

As well as a series of guitar duets, both studio and live: