Sometimes you start listening to a recording and instantly know you are hearing something special. On the ECM release, White, guitarist Marc Sinan joins Oğuz Büyükberber on clarinet, bass clarinet for a series of partly composed, partly improvised duets. And when I say joins, I mean joins; rarely have I hear two artists so in synch they sound like a single consciousness. Sinan augments his custom-made electric with intermittent real-time processing, and extended techniques positioned to add maximum emotional weight. Sinan discusses his unique take on “classical” music combined with improvisation.

When I picked up the guitar as a six year old, all I ever played was classical music. A few years later, I found a very inspiring teacher, Leopold Henneberger, who let me play whatever I wanted, so I also played and sang many songs I liked.

When did you start playing electric guitar?

What I do today is more or less what I did when I was in seventh grade. I wrote a few sketches for guitar and saxophone for a concert at my first high school. We performed these pieces with some adventurous and improvised sections alongside some Twentieth Century compositions by Leo Brouwer for solo guitar that I was playing at the time.

Why do you think many schooled guitarists are venturing into free improvisation?

Maybe because we get bored by the process of learning and performing only composed material? The way we learn and perform music also reflects a model of society. Musical freedom is real freedom and it will hardly be found when all you ever do is stick to rules someone else has given you, note for note. That can be pleasant, but I would rather opt for some wild, free space at times.

That is a tough one; it changes by the day. Just recently I rediscovered harpsichord music by Antoine Forqueray and Gesualdo’s choir music. Heiner Goebbels has been an inspiration for a long time, so has Luc Ferrari, and always Ligeti and Conlon Nancarrow. I love some stuff by David Torn and Bill Frisell. I heavily miss John Abercrombie. In the fall, I will be working with Oscar Bianchi for the first time, whose music I value very much. I have been recently collaborating with composers like Turgut Ercetin, Zeynep Gedizlioglu, Helmut Oehring, and Vache Sharafyan, all of whose music is very special to me. I always love listening to traditional music from around the globe, the less globalized and amplified it is the more it touches me. In the car, I recently have been listening to “The National” and some “Snoop Dog,” so the kids can learn some proper English.

Which guitars, amps, effects, plug-ins and software do you use to create your music? In general and on this record.

I compose on paper and notate in Sibelius using Ableton Live to generate material. As far as effects go, I use Ableton Live with Max for Live Plugins and NI Synths and effects. I used Ibanez Tubes Screamer and a Fulltone Fulldrive 2 Mosfet overdrive pedals, and an Overloud TH3 Custom Guitar Effects modeling system that I triggered with a Keith McMillan Softstep (which I do not like so much) expression pedal. For reverb I used a Native Instruments’ RC24 plugin, and their Replika XT for delay. I also love my Earthquaker Devices Gray Channel overdrive and the EHX SuperEgo. 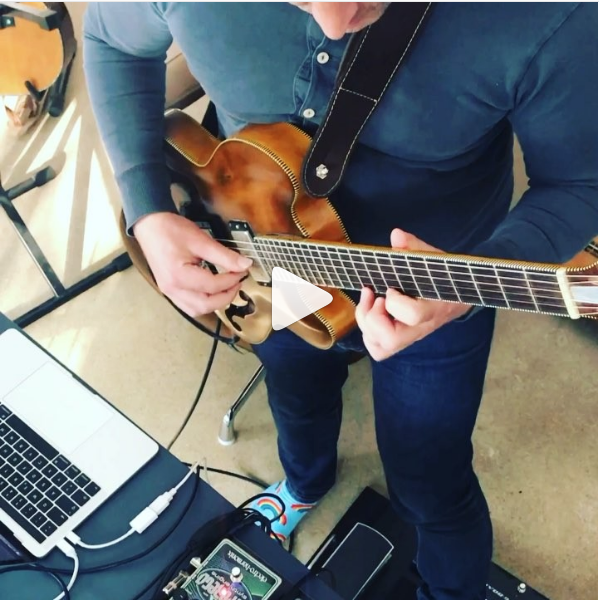 I mostly play my custom made Nick Page guitar and a twelve string Octave guitar by Stevens. I am using a Fender Twin Reverb, a Gibson tube amp, a Fender Eighty Five, and a couple of AER amps. The classical guitars I play most are my Hermann Hauser III and my Thomas Humphrey.

What is that pickup on the body of your classical guitar in AN SYLVIUS/ in Berlin /Radialsystem V?

That is my Thomas Humphrey with a built in B-Band. It is not used for the recording.

At the same show you go from free improvisation with a slide to Bach’s Bouree. How do the two relate for you?

Energywise, a lot of Baroque music incorporates an original character that is hidden behind uptight performance practice.

You have said, “The guitar is manipulated most of the time on this recording, and that’s not always audible.” How is it manipulated?

I spend a lot of effort creating illusions around what is acoustic and what is electronic sound by creating very smooth and barely audible transitions using reverb as an effect, rather than as a means of creating space, and by looping and transposing in Ableton using Novation Midi Control knobs.

How did you achieve the piano-like low notes on “Yellow” and “Blue?”

It was an FM Synthesizer triggered with a Fishman Triple Play Midi-pickup.

Was the distortion and reverb/delay triggered by you during performance or applied in post?

As far as I can remember, there was no postproduction on this record, not even edits.

How much is composed and how much improvised throughout White?

Half and half, depending on what you consider improvisation.

You and Oğuz Büyükberber often sound like one big instrument. Was the musical empathy instantaneous or did it develop over your time playing together?

I think we have grown to be very symbiotic as a duo, and very close as friends.

Playing live is a very exciting state of being. When I record, I am playing live as well.

Who else would you like to collaborate with and why?

I would love to write my first opera and ask Werner Herzog to stage it. And I am very interested in continuing to try new paths. I love to collaborate with strong artists. This weekend, I will perform in Prague, in a duo with my wonderful colleague Iva Bittova, accompanying Murnau’s Faust. Tonight is the premiere performance of my musical theater project Hecheln for Theater Bielefeld, with their Philharmonic Choir and members of the Philharmonic orchestra, staged by Tobias Rausch, a very special director of documentary theater.

In general, what are you trying convey with your music?

It very much depends on the context. In general, I have grown heavily bored with “entertainment.” Hopefully, here and there I manage to create something meaningful, light or heavy, joyful or sad, simple or complex, just living by the rules I choose.