Over three decades, Knox Chandler’s career has including performing, recording, arranging and producing, with REM, Depeche Mode, Grace Jones, Marianne Faithful, Natalie Merchant, The Creatures, The Golden Palominos, as well as stints as a member of The Psychedelic Furs, Siouxsie and the Banshees and Cyndi Lauper‘s band. His most recent venture is the creation of his sound ribbons/tonepoems. These are real-time musical soundscapes created through iPad and computer manipulations that process and iterate the electric guitar. They are improvisations composed on the spot, using no pre-recorded audio or sequencing.

Probably more free-style improvisation because it was my own. I never really have felt proficient playing other peoples music. I do think there was a time in college when I could say I was proficient on upright bass. I was playing in the orchestra as well as jazz ensembles. I was playing Mingus to Beethoven to Jacob Druckman. Free jazz was big in the seventies—Dave Holland, Art Ensemble of Chicago, Leroy Jenkins etc. were a huge influence.

What led you to create more experimental (nonmainstream) music?

It’s more like whom—Hendrix! Not the notes but what he was doing with feedback and tape manipulation. At age ten, I bought my first electric guitar with money I made selling chicken eggs (I had about 20 hens). It was a Pre-CBS cream Fender Mustang. I can still remember my excitement about the smell inside the case—I can still smell it. My dad had an old mono system for his record player. It was a Bogen PA head with a 15″ speaker. That became my amp. I lived in the attic and would sit up there playing with feedback for hours. My dad and I built a shortwave radio around this time. I never got really use it but I liked the sounds it made. I would play it through a wah-wah into the Bogen. I wish I still had all that gear. Things took a real jump somewhere in the early ’70’s when my dad bought a Tandberg reel to reel. It had sound on sound. I spent all my time recording and manipulating tape. That was the groundwork for what I do today.

That’s a huge question because anyone at any time can inspire me. In the past it was easy: Hendrix, McLaughlin, Miles Davis, Jeff Beck, Stravinsky, Mingus, etc. Actually [saxophonist] Gary Windo was a huge inspiration. [Siouxsie and the Banshees drummer] Budgie inspires me. We sit down to play and it is effortless and totally inspiring. Actually the latest ones to inspire me were Tony Bennett and band. Tony Bennett is 88 and you can see it, yet he puts on a full show. His singing is still great and he loves it. He must have done four or five encores. His guitar player Gary Sargent had a unique tone and his approach was super inspiring. Harold Jones on drums was nothing but inspiration. My friends and I walked out transformed—go figure. I never would set out to play that style but great music is great music no matter what flavor it is. I also saw Neil Young this summer; He’s another inspiring soul. He came out to a sold out crowd and what did he do? —Played “Down by the River” for 25 minutes—Fuck yeah! Birds, frogs and city streets also inspire me.

Two and a half years ago I moved to Berlin—mostly because Budgie lives here. Plus it’s a fantastic city. I had a vision of what I wanted to do with my guitar and processing. So for the past two years I have isolated myself and worked very hard at playing with software and experimenting with a large assortment of iPad apps and plug-ins. I developed what I call “sound ribbons/tone poems.” I usually just refer to it as sound ribbons. They are real time multi track soundscapes. I think with anything, the more you do it the better you get.

I’m truly not trying to convey anything. My music is the closest you are going to get to me. It is the highest form of expression and the most powerful tool of keeping it in the “now.” I don’t really know what happens when I record and perform but a lot of it doesn’t feel like me, and that is when it’s good and working. What do I expect people to get from my music? I want them to be taken somewhere that’s their own.

Everything changed when I moved to Berlin; I stripped down. My live rig is the same as my recording gear; my live rig is my studio. I’m using Ableton Live with a new MacBook Pro. I have two RME interfaces: the UCX is the main interface and the Babyface is for Class Compliant iPad Apps.

With the sound ribbon stuff, which I also use in other ensemble situations, I am using Ableton Live as a rack mount/mixer, not at all as a recording or playback device. I split my guitar signal either before or within Ableton, sending one signal to a designated channel, which often has Native Instruments Guitar Rig, and several other plugins. The other signal is sent to the Babyface using Class Compliant on the iPad. I am using several different iPad Apps for processing.

I have to credit Rick Cox here. Rick is an amazing modern guitarist whom I was able to meet and hear while he was on tour with Jon Hassell. He is the iPad app guru. The apps I use mostly are Yellofier, Samplr, Donut, IDensity, Grainproc (which unfortunately doesn’t work with iOS8 yet) and a few others. Rick recently turned me on to FEED, which I’m digging. On his recommendation I just downloaded the Holderness Apps, which I’m playing around with. I love Borderlands but it doesn’t meet the aesthetic of sound ribbons, as you can only use it with pre-recorded audio.

Another App that I’m very excited about which I cannot name at this time (because it’s still in Beta testing), Is the looping brainchild of Peter Freeman. This is a multi track looper very much like the Electrix Repeater. Peter is also the genius behind the later Jon Hassell recordings and he is my connection to Rick. He is the person I credit for anything to do with gear and computers. As well as being an amazing musician/bassist etc., he is on the cutting edge of technology. He turned me on to Cubase back when it was only in black and white, running on a Mac11, and through the past several decades has been my go to guy. He turned me on to the Electrix Repeater, which was my main bit of gear up until I moved to Berlin. This looping iPad app he is developing, along with a major company, is super powerful and takes the Repeater one step further. I’ve been beta testing it and starting to use it more with the sound ribbon work despite the usual beta testing crashes. You will know about this app soon enough.

Back to the computer: I am using Max for Live as a mixing/routing device. One channel designated for input guitar and the other for iPad. On the average I have about six returns. Some of the plugins I use are Looper, Turnado, SoundToys, Waves (mostly the vintage EQ and compressors), Max plugins, and my favorite: Soundhack. Soundhack has an amazing looper as well as pitchdelay, spiralstretch, morphfilter, binaural (which is a must for live)—actually all of Soundhack is amazing. Tom Erbe is the man! I will often record the ribbons by resampling. I also have another iPad running Lemur Wi-Fi that I use to play with parameters on the plugins. The only hardware I use, other than interfaces, is a Zvex Super Hard On. I have one of the early ones. It truly enhances the pickups on my vintage instruments. Occasionally I use the Zvex Fuzz Factory with a wah. I have a nice collection of guitars, mostly vintage, but I won’t go into that because it doesn’t apply to what I’m doing now. When in Berlin, I mostly use my 1968 Fender Telecaster and in the States I use my 1959 Fender Stratocaster. No amps!

They are equally satisfying for different reasons, but both require the same detached, yet in the now, experience.

Probably people remember me from all the bands and artists I have worked with as well as the “wonders” of Facebook etc.

There are so many! Right now I’m doing some collaboration with Miss Kenichi. She is a great talent that leaves you in another space. I would have loved to have collaborated with Harry Nilsson, just to get inside his world of harmony and rhythm. Using some sound ribbon stuff with him would have been cool, even though his music is so perfect on it’s own. I would love to collaborate with Grace Jones again. We collaborated on a track, but a Creatures tour I had committed to interrupted it. She is the real deal: raw, lot’s of energy, and really knows herself. There are so many that come to mind from all different styles. 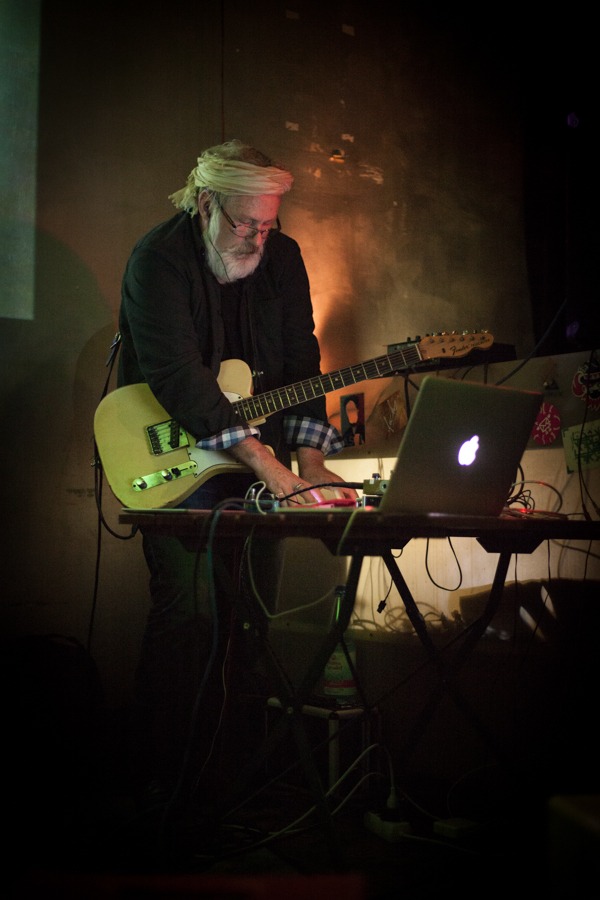 There are three main ones. My solo “sound ribbons/tone poems” project is up and running and starting to gig. I have no label and am not sure how I want to go about it. You can stream some of it through my site. Then there is the duet stuff with Budgie, which is in the same situation as to getting it out there. And there is Bug, which is Mark Plati, Doug Yowell, Budgie and myself. This is a special project with great talent and we are carefully taking our time. Again, it’s all early days and we are dealing with a different time in the music business. Our/my attention is towards playing live around Europe mostly. I’m very excited about the future of all three projects.