We have entered an age where guitarists often abandon notes for the musical manipulation of pure sound. Stian Westerhus is one, and Julien Desprez  is another. Like Westerhus, the French guitarist is in such solid command of his effects that they become a musical instrument when combined with his manipulation of strings, slams on the guitar body, and twists of the instrument’s volume knob. Almost more amazing than Desprez solo, is how he integrates these sounds into such a wide variety of musical contexts.

I had begun playing music at 16 with some friends down the street from where I was living. We were smoking joints and playing Nirvana’s “Come as You Are” and Red Hot Chili Pepper’s “Under The Bridge.”

After two or three years of teaching myself, I met a jazz musician who advised me to come to the jazz school in my city, Yerres, near Paris. At school, there were a lot of people to play with. There, I met Patricio Villarroel, a pianist and drummer from Chili. He taught improvisation, and offered me new ways of thinking about music, like how to shape an improvisation, and how to communicate with other musicians when you improvise. But the most important thing he taught me was to question what you are doing with music: Why do you do that? Who are you ? What do you want to do in music? What do you hear? He taught about developing your personality, and about the relationship of free improvisation to structure.

We listened to lot of different music: traditional jazz, free jazz, rock, noise music, contemporary music and pop music. I was led by the idea of finding myself through music and expressing something bigger than myself, saying something about the world and not only you. All those things brought me to the thing you call “experimental music.”

After I started to play the guitar I began to like jazz, free jazz, and improvised music. The “big daddies” of jazz of course, like Miles Davis, Charlie Parker, John Coltrane, Lester Young, and Lee Konitz, but I really felt in love with Ornette Coleman. He’s one of those musicians I will listen to all my life.

I listened to classic rock acts, but today I’m more a fan of Deerhoof; they are geniuses and completely crazy! I listen to contemporary music like Olivier Messiaen (I was stuck on his harmonic system for a long time), Varese, Grisey, Ligeti, Schoenberg, Romitelli, Murail, and Xenakis.

I continue to listen to all that stuff, but I’m currently more interest in electronic music and noise music: musicians and performers like Ryoji Ikeda, Alva Noto, KK Null and Keiji Haino (I really like him).

By practicing, reading books (like Tristan Garcia, Gilles Deleuze, Pierre Desproges), watching movies, going to dance shows, and listening to and thinking about music. All kinds of art influence me and my music. I am constantly trying to find new ways of sound organization.

I try to share my feelings about the multiplicity of the world. All of its different sides. You can feel a lot of different little worlds but actually there is only one that contains all the rest. You can never know the limit of this world, the unknown. I try to share this feeling. The world is the only thing you can enter but never get out of. 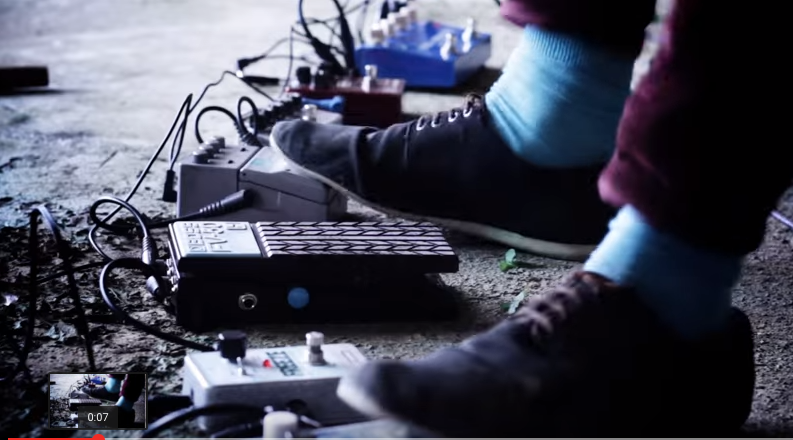 I use a 2006 Anniversary Fender Stratocaster. It’s my only electric guitar. I don’t have a big passion for equipment like pedals, amps, etc. I use what I need to do what I want. It’s the only way to think about guitar equipment. I care more about how you use it.

There are two ways to think about effects for me. First is the normal way: use it to transform guitar sound; like any overdrive. The second way is to think of them as a little instrument completely separate from the guitar. It means you have two instruments: in your hands and at your feet. 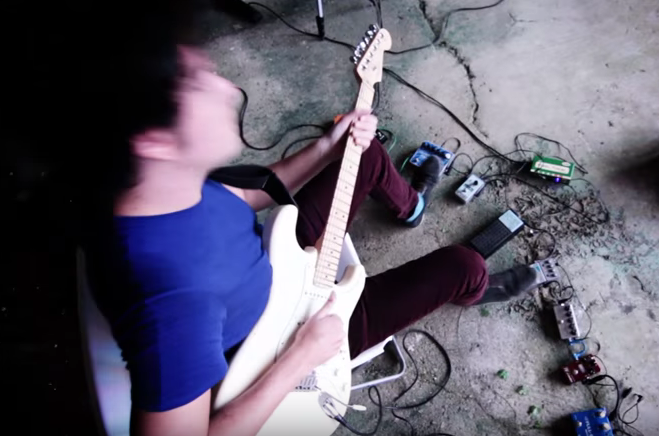 That said, this an example of the effect chain I use most often: The guitar goes into a Ho-Tone Grass overdrive and then into an MXR Custom Badass ’78 distortion. It then goes into a Zvex Fuzz Factory (I love this one, as you can create really violent white noise) and into an Ibanez Tone-Lok SM7 Smash Box (really nice when you hit your guitar with it on). From there the signal goes into a Boss volume pedal, an Electro-Harmonix Freeze, an Electro-Harmonix Holy Grail, and finally into an Electro-Harmonix Memory Man with Hazarai. I don’t use the Memory Man for it delay sounds, but for its electronic side, like infinite tap delay in an Alva Noto way. To me the Freeze, Memory Man, Fuzz Factory, Smash Box, Holy Grail are all true instruments that you can play without a guitar.

I really prefer performance, a live show. It’s the thing I do most often and I make music for that first. The stage energy of each live show is a rare and unique moment. I feel musicians play “with” and not “for” the audience. The public and the musicians all feel something together during a show. I like this communication of energy that works in two directions.

That doesn’t mean I don’t like to do records or videos. It’s just more a work process than a really big thing. I really enjoy thinking about what we’ll do for the CD; how we can put what we do on vinyl, CD, or digital and which people will listen to it when musicians are not here. That means finding a way for your music to be complete without playing it live.

I did it by playing everywhere possible. For everyone I can find: kids, adults, all social classes and communities. I like to play where non-mainstream music is not expected.

I would like to collaborate with people who are not musicians: designers, light creators, sounds designers, engineers, dancers, or philosophers, to create a new form of show, or concert. I would also like to do a duo with Stephen O’Malley from SUNN O))).

What is your latest project? When will it be available and where can people in different parts of the world get it?
My latest project is Acapulco Redux. A new solo performance where I play a light stage device made up of three lines of LED lamps. I created this in collaboration with Gregory Edelein, who is the scenographer. I control the light with eight small, black boxes like guitar pedals. You can see a video here:

We’ll do a new CD with Snap (with Yann Joussein on drums and Clément Edouard on keyboards and electronics) in fall of 2016. But you can check our latest video here: