I was contacted by Florent Paris who sent a picture of his pedalboard and asked about reviewing the two-song EP of his music project Hors Sujet (loosely translates as “off topic”).  We don’t usually review recordings here, but his ambient combo of loveliness and drama was intriguing enough to instigate an interview.

The very first instrument I played was the drums, and back in the day I was playing in a band with a totally different music style than now. I was an 18-year-old grindcore drummer.   Guitar is different, I practiced and learned all by myself and started this musical project which is called Hors Sujet, but I didn’t I want to play one kind of music with it. It is mainly instrumental, from mellow and warm, to noisy and cold.

At first it was gear. Every time I bought a new piece of equipment, a new musical instrument, or something new to make music with, I was immediately trying to find the maximum usable level of it.  Now that I’m used to my gear, I try to do the same by adding new non-musical stuff or electronic stuff to the music.  But to be a little more specific, the first time I started to compose (mainly about the dreams I had), it was such a huge relief, like a medication, a drug, because at that time I didn’t want to make a simple verse/chorus songs. It didn’t have to be experimental music, just something that comes from experimenting and ends in a well structured-song.   I’m always trying to find diversity, intensity and passion in music, so that always means, “do whatever you wanna do, you’re free”.

When I was a kid, rock was always present in my parent’s home. Even if I never really listened to them when I was younger, my father listened to Pink Floyd, the Beatles, and King Crimson. Years later, when I learned guitar and started Hors Sujet, I was into Godspeed You Black Emperor, Silver Mt Zion, Set Fire to Flames, Radiohead, Mono, and bands like that. The list could be endless, since I’ve always tried to find something that I could relate to. I find the same things in minimal classical music as the violence you find in more brutal and powerful doom music. I think you can find anything to improve yourself in different music styles, from rock, folk, indie, minimal, classic, dubstep, metal.   A fun example is these days, I’m really playing with the Kaoss Pad, just because I’ve discovered a live version of Jon Hopkins rocking three Kaoss Pads at a time. 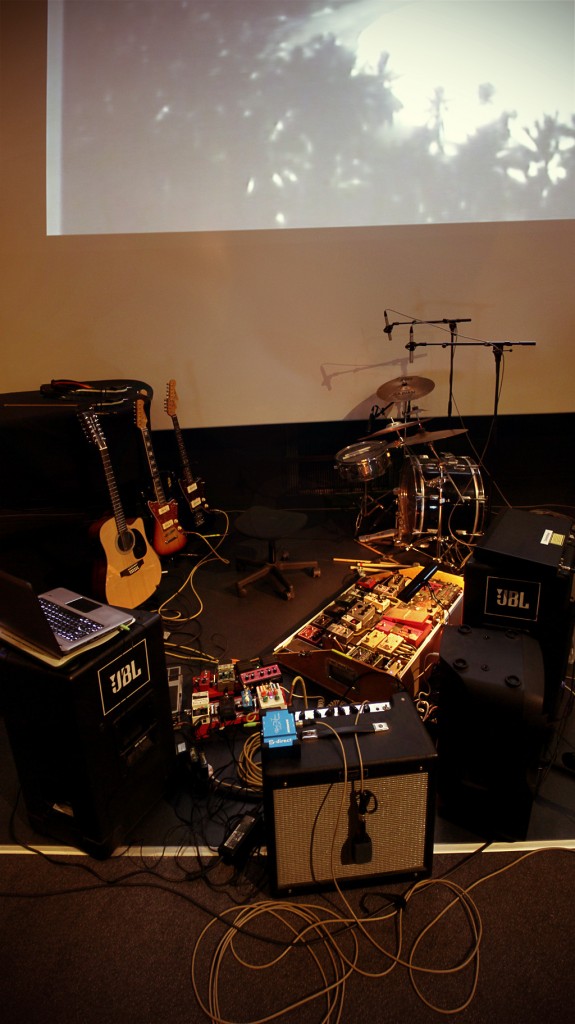 For guitar playing, obviously practice—lots of practice. As to sound, when you’re searching for a certain kind of sound (specially with fuzz and overdrive), you can spend your life buying and trying new gear. Since the addiction of this syndrome is a high-level time-eating habit, you have to focus on what’s most important to you. When I figured “Okay, this is what I like,” I tried to freeze the setup and get used to it. But I also improved a lot of things by trying new instruments: Casio SK-1 for sampling; acoustic guitar, mandolin; and different tunings for guitars.   But mainly, to go forward with my music I’m focusing on finding new boundaries, create the lack thereof in songs, and accepting the silence.

Images in the mind. It’s a personal interpretation every time, but that’s the most important thing. When you can relate to something you experienced because the music is creating images in your mind, then you’ve experience your own emotions and feelings. Most of the time, I compose songs because I’m in a certain kind of mood, and I always hope that I’ll be able to share that, and that people can reach their own status of emotions if they listen what I do.

There are many questions I’m asking to myself during the process (not related to music) that are a part of the creation, and that ends up in the music as well. Most of the time, I’m pretty sure that’s what makes music useful when you listen to it. This isn’t about compassion or empathy, for example: it’s not because you’ve got the background story of a song that you can analyze to understand the meaning of a song.  I try to give clues and snippets, not for a confusing purpose, but hoping that it will lead to the main message in the listener’s mind.

I’m running a Fender Jazzmaster and two other guitars (in open C) into a Fender Blues Junior and an Alto TS110A Active 600 Watt 2-Way 10″ Loudspeaker. The pedalboard changes from time to time, but I rely a lot on the Fairfield Circuitry’s Barbershop with some reverb (Boss RV3), some delay (Sib! Mr Echo), and I try out new combinations of pedals. The routing changes a lot. This is my live setup, since I’m also running a computer in addition to the pedalboard going into the TS-110A with a Morley AB box; it gives me loud and powerful bass. 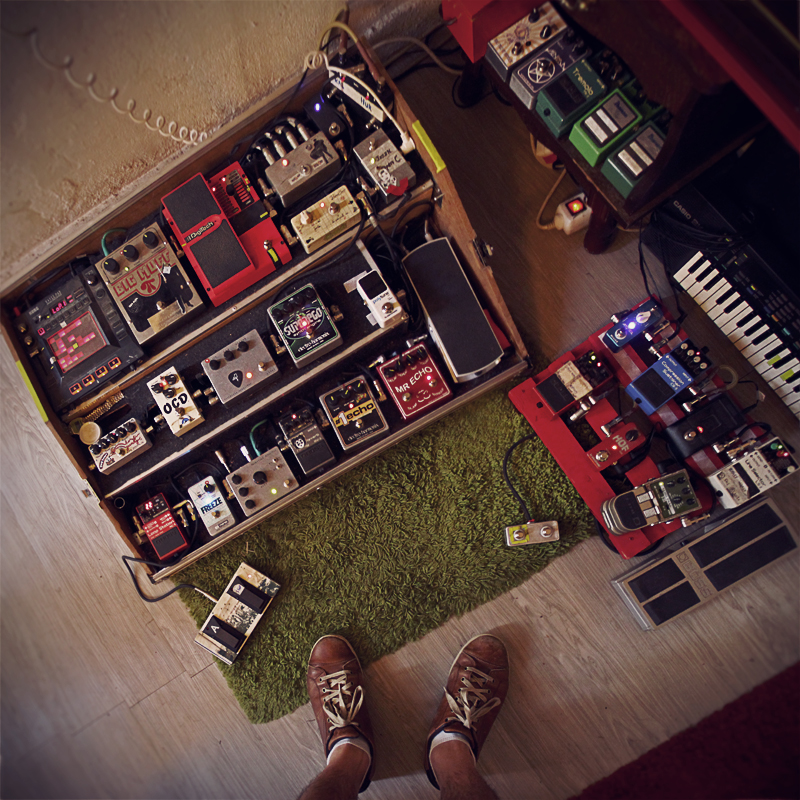 I love to start with the Kaoss Pad III, recording some little layers, torture them, then find a rhythmic section, sample it with a Boss RC3 Loop Station, then mix the KPIII with the RC3, see what happens. On “L’ancre et la tempête”, it’s almost a live recording like that. I also dig heavy fuzz, coupled with the Whammy (one octave down), and I play a lot with feedback.   When it comes to acoustic sounds, I make a lot of field recordings. I use Piezos mic on unusual parts of the instrument.  I don’t use many plug-ins, but I love spending hours mixing and mastering the sound.

So far I would say recording, because I’m playing alone in this project. Recording and mixing are so exciting when it comes to finding and sculpting a certain type of sound. Being able to lay down a song and meticulously mix it and arrange it for hours is so enjoyable.  Playing live is a different kind of excitement. When it comes to ambient music, I’m waiting for a certain moment to drop certain notes, and when you wait for it, you can feel that there’s almost a danger in it. I’ve played for some cinema concerts (White Shadows of the South Seas, Greed, Saturn Films) and this is a thrilling experience. Composing an original soundtrack to a movie and playing it live is really a true challenge. 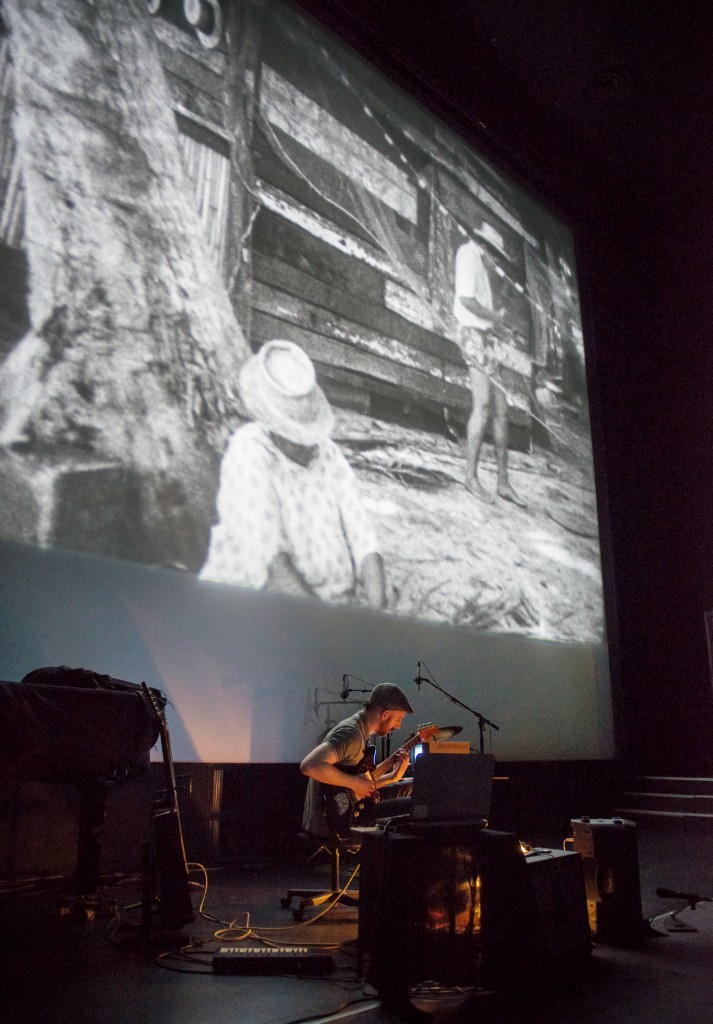 Since I haven’t played live that much, a lot of it is on the Internet. A lot of people who started to follow me in the first days are now friends; I still I talk a lot with longtime friends who were interested in my project. Despite the fact people say, “if you don’t play live, you won’t have an audience,” I think I managed to spread my musical project over the years (and I’m still trying to do it), hoping that people will enjoy it and would find time to relax and appreciate it. These days I’m focused on playing more live, and getting in touch with people in the moment.

I’m really open to collaborations. For now I would really enjoy playing with classical musicians (violin, cello) and with piano players. Even electronic music would be nice to try as collaboration. This project takes a lot of time, from the beginning of a new project to the end (composition, recording, mixing, mastering, photographs, artwork, spreading the thing, etc.) and since I have been playing solo for years, I didn’t really take time to consider it.

I have just release a new two song EP, called Novembre, a 20-minute travel story. The EP is available here. 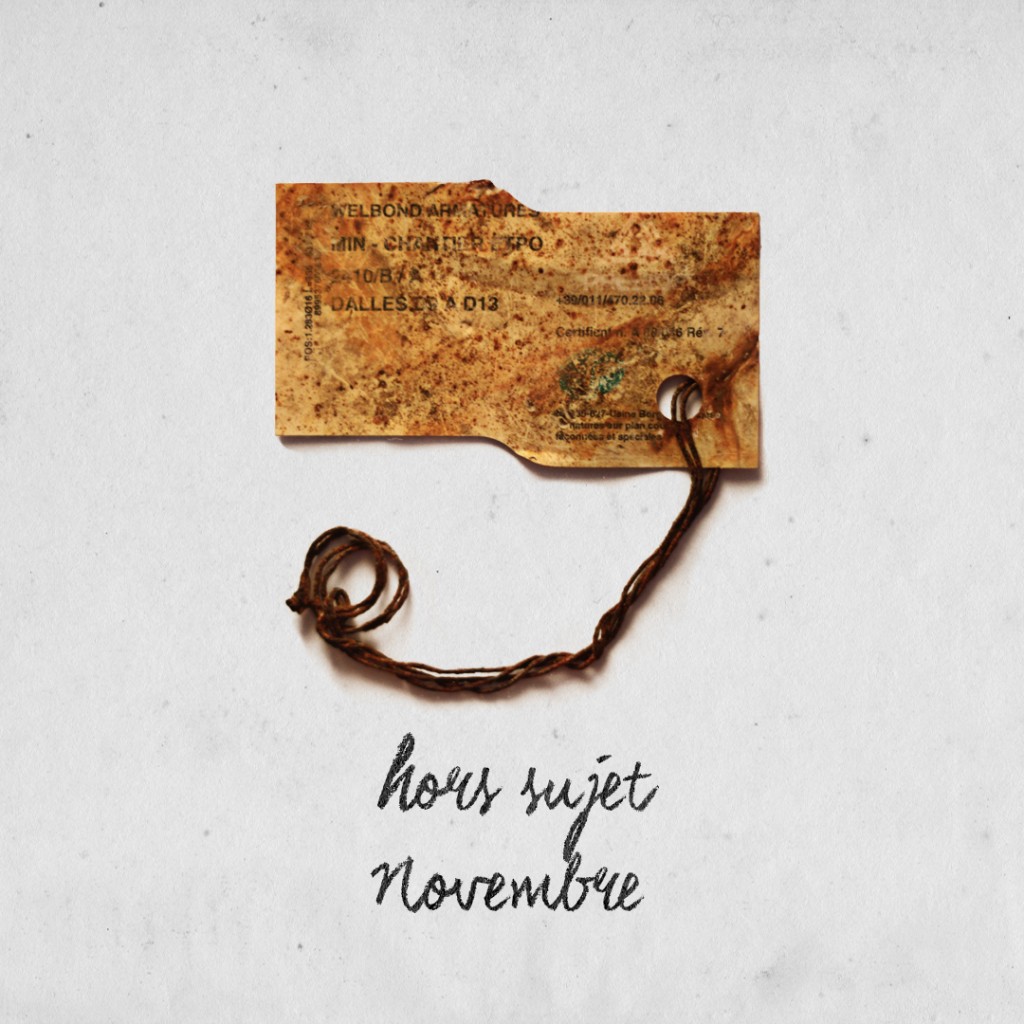 All my previous works are available at a fair price. I’m still working on the upcoming CD. The release of this one will probably be around late 2014 early 2015. I update all the latest news regarding my live shows, music, videos, and pictures on Facebook, feel free to come by and send a message.