It starts with the sound. No matter which guitar Even Helte Hermansen is playing, from Danelectro to Washburn N5, his tone manages to be searing, but warm, aggressive, yet inviting. The telepathic interplay evidenced by his collaborative trio, Bushman’s Revenge—best described as Cream meets Sonny Sharrock in Norway—allows them to deftly dance between chaos and control. Here Hermansen tells of his love for Kiss’ Ace Frehley and his ongoing struggle with staving off boredom.

Despite a bass dropout out from technical issues, Hermansen rips up this Sonny Sharrock cover from the Bushman’s Revenge A Little Bit of Big Bonanza.

All I’ve ever wanted to do is to play rock guitar. Ace Frehley has been my hero since my friend’s older brother gave me a couple of Kiss tapes. I was 2 or 3, according to my mother—she wasn’t as excited as I was.

When I was 13 this guy introduced me to modes and Satriani. That was it. Satriani led to Vai; Vai led to Zappa; and Zappa led to Coltrane and all kinds of craziness. Coltrane was the life changer. But the funny thing is, I never did learned to play rock guitar properly. Secretly, I know that I just want to sound like Malcolm, Angus and Ace.

I’m not sure the word “experimental” applies to what I do. In my mind, I’m trying to play “normal” guitar, but then usually failing. I don’t worry about style, or what might be considered “right” or “wrong” in certain settings.  Next week I’m recording with my punk band. In that setting, as in any other, I simply try to follow my intuition and play what I hear. If that means playing country licks, then fine; who cares if somebody thinks it’s a mortal sin? I certainly don’t. Genres are artificial anyway: music is music, if works it works. But then again, it doesn’t always—and I really can’t play country anyway.

Discovering new music inspires me, or rediscovering. I still buy records and listen to stuff all the time. I’m probably more of a music geek than a musician. Lately I’ve been listening to people like Janelle Monáe, Louis Prima, Mingus, Jeff Lynne, Busta Ryhmes and Pantera. I recently bought Hendrix Live at Fillmore East. I always preferred Band of Gypsys to the Experience. I’ve also finally gotten hold of the Larry Young’s Fuel records, which are great. Otherwise my heroes are pretty much the same that they’ve always been: Coltrane, Shorter, Black Sabbath (w/Ozzy!), the Beatles, Monk, Bob Hund, Supersilent, the Kinks, Motörhead, King Crimson, Kate Bush, etc. 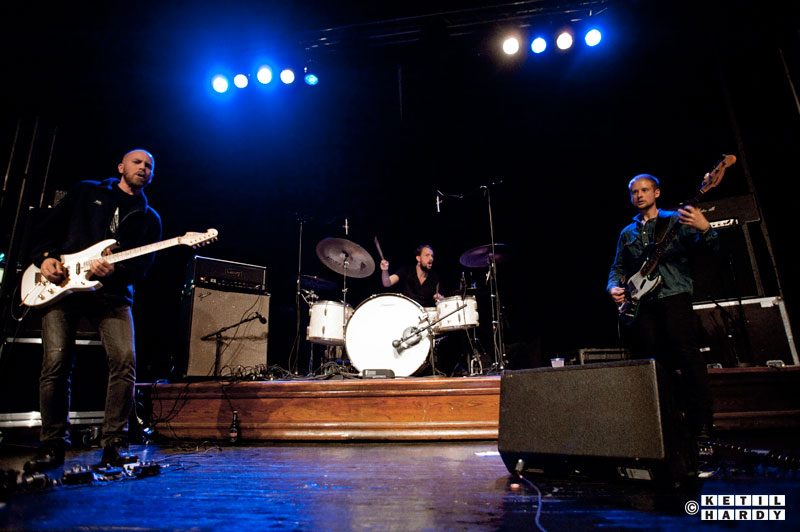 My style is the combination of my limitations and my attempt at playing the music I hear. I’m terrible at copying other people, but I realized at one point that it doesn’t matter. I started paying attention to what my strengths were, and my own ideas, and then tried to develop it from there. I try to play honestly and trust my own intuition. Whether or not it sounds good, is another matter; for better or worse, it sounds like me. It’s all the sounds I’ve ever heard, recycled through my own personality and physique. If I’m unable to play something, it might be that I’m not really hearing it. Besides, the world doesn’t need another bad Ace Frehley copy.

Tell us about  Shining.

Shining are great players that I’ve learned a lot from, but it’s Jørgen Munkeby’s band, whereas Bushman’s Revenge is not my band, it’s a collective. I might write most of the sketches, but everybody has their equal say in everything. There’s a lot more freedom musically. Shining sounds more or less the same every night; I prefer not knowing what’s going to happen.  I’m not sure if I was given carte blanche, or if I just took it without asking. I used to try to change things all the time, including my gear—I get easily bored.

Most of the time I would play Gibson SGs, sometimes a Jazzmaster or a Danelectro, but I also used my Mustang for the Black Jazz album. I was never happy with the SGs anyway. Jørgen was playing a seven string when I joined, but I wouldn’t be caught dead with one; I started experimenting with different tunings and gauges instead. I started dropping the low E to a B, then later to a A, and eventually tuned the whole guitar to B, B drop A, A or A drop G. That worked better with the longer scale guitars.

Amplifiers would be anything and everything, as long as it was loud and had some low end. The distortion sources would change all the time—not always to everybody’s liking. My usual setup would be sometimes just the amp, or with some kind of overdrive, distortion, or fuzz pedal in front, with a wah or some kind of modulation device before it, and an analog delay at the end. It was all pretty straight ahead stuff really, but there was never a particular winning team. I’m not even sure I ever had the same setup twice!

I love playing. I play for myself, but if it means anything to anyone, then great. I realized a long time ago that what I love about Coltrane is the same thing I love about Sepultura or Joni Mitchell. It has some kind of raw universal energy to it. To me they’re just different versions of the same thing. I would like to tap into that, but I think a lot of the time, what I’m actually conveying is just my own frustration.

The only thing that’s constant with my setup is that nothing’s ever constant. I’ve never found that “perfect combination,” and gear has become more off a necessary evil. I keep making changes either because something breaks, or I’m bored or unhappy. There is always a lot of room for improvement anyway.

The last Bushman’s Revenge record was recorded last summer. Most of the gear has been changed and changed again since then. It was recorded in Athletic Sound, which is a great, old school analog studio in Halden, Norway. I think we were there for 3 days. If I remember correctly, I used a dual amp setup throughout. One was an old 50-watt Fender Bassman head I bought the day before leaving (without a test drive). We used a 4×12″ cab instead of the original 2×15″. It’s currently my favorite amp. The other was a moody, old ‘70s Marshall through a 4×12″ cab, with one speaker blown up. I think they were recorded with a pair of Shure SM57s.

I used two guitars for the session, a Fender Mustang and a Washburn N5. Mustangs sound great to me. They sound crappy in a good way—they’re by far my favorite guitars. But of course they really are crap. Mine is heavily modified, but is still impossible to get it in tune. I wanted an N4 as a kid, but couldn’t afford one. (Nuno was one of my heroes.) I found the N5 on holiday in Thailand. It looks awful but it’s great—I call it the “golden whore.” It has the strange combination of a Floyd Rose and a single coil in the bridge position. I prefer single coils. I love the sound of someone like Billy Gibbons, but it’s not what I’m hearing. I used to play SGs with Shining, but they would always break, and I found it much easier to hearing myself through the cacophony using single coils.

I use a bunch of pedals. They’re all in a chain all the time, but have true bypass. Everything ran into everything, except for the Rat, which only went into the Bassman. I think the pedals were a Death By Audio Octave Clang, into a Boss flanger, a Univibe copy, a Big Muff, a Korg tuner, EHX Freeze, and Visual Sound GarageTone Series Axle Grease Delay and Ibanez analog delays and the Rat, in that order.

Playing live.  I love playing with people, whether in front of an audience or just rehearsing by ourselves. I’ve always found studios very artificial. I don’t like the stress, and I don’t think I’ve ever played well in a studio setting. Something in the process always seems to get in the way of the actual music. I don’t care about the result that much. For me it’s more about the trying and the journey. The studio is all about results, and I keep getting hung-up on details that don’t really matter.

I’m not sure there is a single audience for my music. I’ve done some different things. It seems that there’s an audience for extreme metal, another for country-jazz, another for jazz-rock etc. I like to play, and if someone likes it, then hopefully they’ll be back. 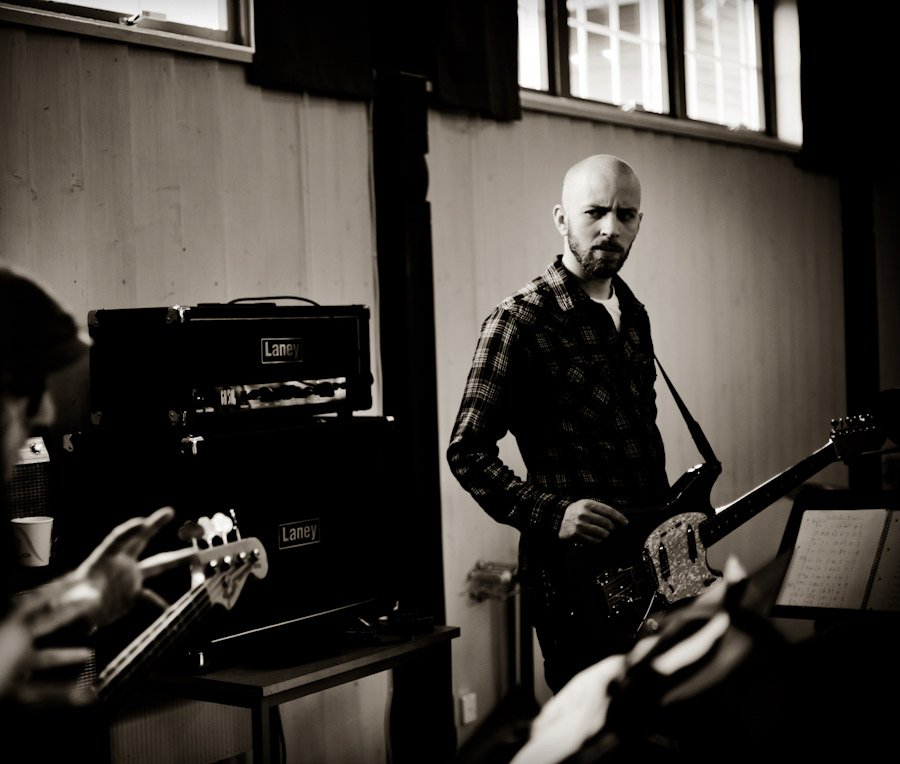 I’ve done a bunch of very different stuff with very different people, and I would like to get back to doing more of that. Whether hip-hip, pop, black metal, noise, techno, roots music or what have you, I’ve learned that there is some great fun to be had, great people to meet, a great deal to learn, and good music to be played.

We’ve just done a few shows with Bushman’s Revenge and collaborated a bit with people like Susanne Sundfør and Kjetil Møster. It’s been great. The band has never sounded better. We’re going back to Japan soon, which I’m really looking forward to, and there’s been talk about a double vinyl live album at the end of the year on Runegrammofon.

My other band Grand General, with Ola Kvernberg and people from Mototpsycho, Goat the Head, and the Core will also be releasing its debut record on Runegrammofon in February.

The main Bushman’s Revenge album is  A Little Bit of Big Bonanza [runegrammofon]We so much fun in the studio, and time, so we decided to record do a limited edition cover album, Never Mind The Botox, at the same time just for fun.

We’ll also be releasing a double vinyl live album within the end of the year, along with Grand General, my other band, on the same label.

I have a bunch of projects, but lately the big news is I’ve stopped using a pick. I’ve never played with my fingers before, but forgot to bring one a few weeks ago, and realized  I came much closer to playing what I wanted without one. I was getting fed up with my own playing anyway—so now I’m a fingerpicker. I don’t have a clue what I’m doing, but I’ve been having more fun playing than ever.

1 thought on “Spotlight: Even Helte Hermansen”