Though “Homage to Greene” inadvertently misspells the name of the British guitarist who formed the original Fleetwood Mac, it perfectly captures the blues player’s more ambient side, as heard in the Mac’s first hit single, “Albatross.”

Not one to dwell in the past, the larger portion of Dream Logic reveals the influence of Aarset’s recent collaborators. The Norwegian guitarist has engaged in much performance and remix work with Dream Logic producer and sampler wizard, Jan Bang, and the inspiration of their past pairing hovers over cuts like “Black Silence,” “Active,” and “Reactive.” They have also worked together with Jon Hassell, and elements of that groundbreaking trumpeter’s work infect “The Beauty of Decay,” with Aarset’s harmonized guitar recalling Hassell’s seminal use of that effect.

Eivind Aarset was fittingly the first interview subject featured in Guitar Moderne and it was a pleasure to catch up with him again. Here he goes into detail about how he created the sounds on the new record.

I was playing rock and blues—inspired by Hendrix, Deep Purple, Black Sabbath, and Santana.

This has been a very gradual move, from being a pop/rock session musician, and then gradually opening my ears to other musical spheres. In the beginning, the feedback noises of Hendrix opened my mind to different possibilities. The process had a lot to do with meeting the right people, who introduced me to different music and other ideas of how to play music. I have also tried to keep my head, heart, and ears open to new input. 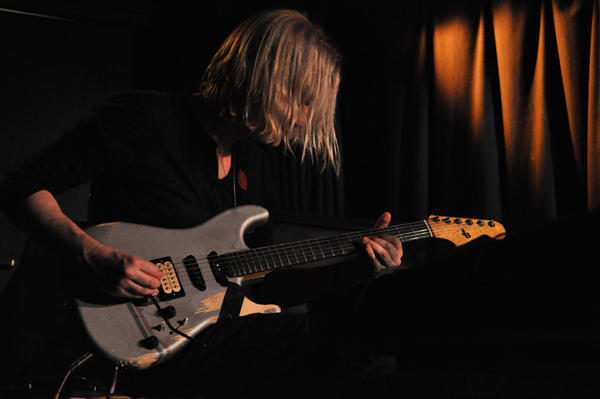 But maybe more important were the people I worked with over the years like Jan Bang, Marilyn Mazur, Bugge Wesseltoft, Dhafer Youssef, Paolo Vinaccia, Nils Petter Molvaer, Bendik Hofseth, Arve Henriksen, the people in my band, and many more. Playing their musical ideas has pushed my mind in new directions.

How did you get better your current style?

By listening closely to what I do; trying to remove things I don´t like; being open to mistakes and new coincidental interesting sounds that might surface.

To express emotions in a musical way that resonates with my own emotions. It gives me great satisfaction if I play a good concert, or record something I think sounds good. The deep concentration zone I reach is sometimes a goal in itself.

On my latest release there were less electronics involved than on earlier records.

“Close (for Comfort)” and  “Variations I and II”

I play my usual grey Braahten Strat with a bow, acoustically through a contact mic, or the electric pickups.  Sometimes it is run through a Boss DD5 with short delay and high feedback, for some resonance. This guitar take was recorded direct. With this sound I create chordal stuff, breath-like noises and some fills. The melodic stuff and some of the bowed guitars, are played on a Duesenberg Starplayer TV going straight in to a Fender Princeton. And there are also some acoustic guitar chords added, played on an old Hofner.

I play my Jerry Jones baritone guitar, through delays from my pedal board (Line 6 DL 4 and Boss DD5), and long delays with a lot of feedback from Ableton Live and SoundToys EchoBoy. I am also using a low-pass EQ  (controlled by a fader on my Korg nanoKontrol) I take away almost all the high end, varying it a bit through the track. I also did a second take with my Braahten Strat using the same formula (low-pass EQ and long delays). Jan is providing drums (the only drum programming on the record) and a bass line.

I play EBow with a fretless guitar and a kalimba. A music instrument school in Moss, small town in Norway, made the fretless. They built it for me as a school project—it is called Mira. Jan is playing one of my harp like guitar loops through his Dictaphone, which creates a nice atmosphere. He also contributes orchestral and marimba samples.

This is based on a sound I found using metal pieces attached to my strings to adding some deep resonance. I put it through the grain delay plug in in Ableton, and rolled off all the high end. The acoustic noises are created with the contact mic on my Strat, and finally I added some EBow guitars.

These are based on layers of the contact miked Strat, with added overdubs of EBow, treated bowed guitars, orchestral samples, and a piano sample. These were the first tracks we laid down on this record, and it helped us find the direction.

I played my Duesenberg direct to a Fender Princeton, along with a Jerry Jones Baritone, and an Epiphone bass. I also used my Braahten Strat, both through the contact mic and electric pickups, bowed and plucked. There is also some action from a Moog Phatty synth in the background, and some fretless EBow guitar. This track is a tribute to Peter Green’s fantastic tune “Albatross.”

I layered ambient guitar, using different delays from my pedal board (Line 6 and Boss DD 5) and delays from Ableton and SoundToys EchoBoy. The solo instrument is fretless EBow guitar. I also play bass guitar. Jan played a sample of Audun Kleive on log drum and did nice subtle editing of the ambient guitars.

“The Beauty of Decay”

This is based around a flute-like loop Jan had in his sampler, I added some bass guitar and Jan added some bass from vinyl. There is some percussion from my contact miked guitar, and some percussion from Jan’s sampler. There is also a lot of fretless EBow guitar with and without harmonizer. This track is inspired by the music and playing of Jon Hassell.

What new pedals or effects have you added recently? What do you like about them?

I added, Big Chill tremolo, DanComp compressor and Boomster booster from Jam http://www.jampedals.com/home/, and Minibone distortion from Trombetta design, which I read about in Guitar Moderne.

The tremolo is more versatile than any tremolo I have used before; and Jam has added a filter, which can be used to create some really cool modulation effects. The compressor and booster are very simple (one knob only), but sound really good and do their job in a way I like. The Trombetta pedal is totally new to me, but it sounds promising, so I decided to bring it along for my current tour and check out what will happen. 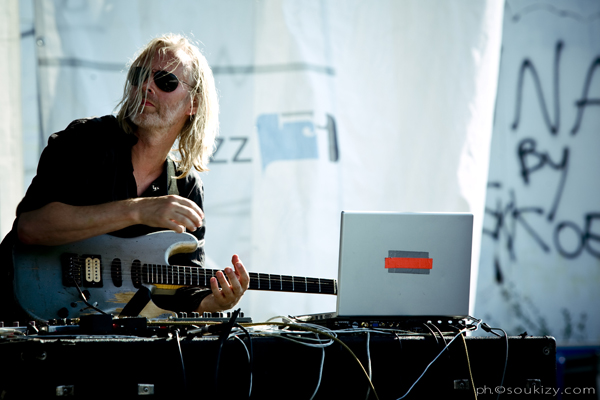 It is hard to for me to say what I enjoy most. Playing a good concert live—the concentration, the energy from interested listeners—is a really good and rewarding experience, and guitar-wise I often find I play better when playing in front of an audience than by myself in my studio. On the other hand, I love to work in the studio, orchestrating with different sounds. When I have a well-made piece ready, when the composition, emotion, structure, and the frequencies sit right, that´s a very good feeling.

I am working on it. I was very lucky being a part of Nils Petter Molvaer’s huge success with the Khmer record.  And, I got a lot of help from Bugge Wesseltoft’s Jazzland label. Because of those two factors, there was some interest when I started my own solo projects. In addition to this, I have been very concerned about putting a lot of energy and love into the albums I make, and not letting anything go before the result feels right. I think records should be artistic statements with a life of their own. I am also very concerned about the concerts, in that I really want every concert to be as good as possible. Hopefully it is this focus on records and concerts that have helped me build an audience. I am trying to get better at it; there is still a lot to learn.

With whom would you like to collaborate (that you haven’t already) and why?

That is a tricky question; I have been very lucky to get the chance to work with many of my favorite musicians, but there are a lot of people I am still curious about, and would like to get to know, or even maybe work with (actually anybody from the list of people that has inspired me). On the other hand,  admiring and enjoying someone’s work doesn´t necessarily mean our sounds and ideas would blend well.

How did your “solo” project become a collaboration with Jan Bang?

This is the first time I didn’t produce my own record, and I am very happy about that decision. Jan and I had been talking about working more together and when the opportunity to do a record for ECM came along, it seemed like a good idea to do a solo record and involve Jan.

How did these compositions evolve?

Most of the record is based on improvisations in layers. It is all based on guitars, but in a non-dogmatic way. If Jan got an idea for a certain sound, we didn´t care if it was a guitar or a sample from Jan. With few exceptions, we just started from scratch with a guitar, and then built the track from there. Two of the tunes, however, are more classic songs, with a clearly defined melody and chord structure.

What was your process of working with Jan Bang?

Jan pushed me into directions and territories I probably would not have touched without him. He has a very creative and open mind. Most of the stuff was recorded in his studio; on some of the tracks I did some overdubs in my studio. And two of the tracks are recorded in my studio, with overdubs at his place.

There are very few drumbeats on the record. Was that a conscious decision?

I think it is more a subconscious decision; we never really talked about it; we just started with the guitars and went from there. But I must say, after playing a lot of gigs with drums and loud guitar over the years, (which I really love), it was nice to do something completely different. I also think it is cool that we kept a concept through the whole record, and weren’t tempted to have more outgoing aggressive stuff mixed in. I think this gives the record a stronger identity.

What made you decide to put a tribute to Peter Green on the record or did the name come to you after?

This is dedicated to Peter Green and his “Albatross,” which is a really beautiful tune with really great production.

With your samples appearing on other work Bang does, the lines of contribution are blurry. How do you two work with that?

Often we just start working on something without thinking about where the music would end up. Sometimes Jan sends me a track and asks if I want to do something on it, or he has some stuff in his sampler after a gig and will make something with this raw material. Someday the track will probably find its way to a record, but as long as the music is nice and fits  the project, we don´t worry about which record it ends up on, or if the lines are blurry. It is also important for me to continue contribute to these projects, as it develops me as a musician.

What parts of the tunes will you keep for the tour with two drummers?

We will play the most normal song structures. But I just played guys in the band some of the more sound based, free stuff and they got into the concept of the different pieces—we will play freely from there.