I know what you are thinking, “Not another Theremin and lap steel duo.” Seriously though, when I first encountered Duet for Theremin and Lap Steel at a small coffee shop gig in Nashville three years ago, it seemed simultaneously like a crazy idea and somehow perfect. On the one hand, the potential pitch problems seemed daunting, on the other, the fluid nature of both was perfect for the kind of ambient music they were purveying. A more recent encounter at Big Ears revealed how much more dramatic Scott Burland’s Theremin and Frank Schultz’s lap steel guitar could sound in a big room with a serious sound system. After the festival I corraled Frank for some insight into their formation and process.

Did you learn to learn lap steel the traditional way, or go straight to sound generation?

I am primarily a guitar player. Scott and I were at a monthly improv session here in Atlanta, where 20 or 30 people would show up. You’d have a conductor who says “You three or you four play.” At some point in the night everybody conducted the improv.  At that point, I did not know how to play lap steel, so I prepared it. Scott had his Theremin, which he didn’t play much at the time. We knew each other and thought, “I bet these two would sound good together.” That’s when I started to learn to play lap steel. I did not learn in the traditional way.

How did you know Scott?

We were friends. We knew each other from music, hanging out and going to see shows. We’d probably known each other for 10 or 15 years before we started playing together.

What made you think it was a good idea pair up lap steel and Theremin?

I don’t have a good answer for that. Maybe because I’d never heard them together. We practiced once a month for about eight or nine months and did a one-off show. It came off and was well enough received that we said maybe we should do this again. We’ve been doing it for 12 years.

The obvious question when you’re talking about a steel guitar and a Theremin, how do you deal with pitch?

We really don’t have many pitch issues. Typically, I will start out with a note or a couple notes and sustain them so Scott knows what’s going on. We’ll just go from there. Sometimes we’ll be playing and look at each other and it’s like “Are you playing this or am I playing this?” Most of the time, I hope it’s me because it sounds good.

What do you use for monitoring on stage to help lock in to the pitch?

Just the house monitors from the PA.

What was Scott’s instrument before Theremin?

Scott played bass, piano, and guitar. We really learned both of these instruments together. The fact that we didn’t know how to play our instruments when we first started had a lot to do with how our music sounds today. It’s slow and evolving and not a real technical showcase.

Are you saying it became ambient music because that fit the fact that you neither one of you had the technique to play something more complex at that point?

That had something to do with it.

Where did the processing concept come from?

I was running the lap steel through a laptop, using Ableton like an effects bank, instead of a bunch of pedals, mostly for delay and reverb. Scott was playing unprocessed until I said “Let’s plug you in to my laptop. I’ve got a second input and I’ll process you with the same effects I’m using.” That opened his eyes and he started bringing his laptop and running through the Live effects as well

Which plug-ins are you using for your sound?

I use some standard Ableton plug-ins, a little pitch shifting and delay, as well as Soundtoys’ EchoBoy and Crystallizer. I also use the Eventide Blackhole plug-in. One of my favorites is a free VST emulation of the Frippertronics two tape system, called Ellotronix. I use that a lot to help with transitions between sounds. I use a little GWS Fragpedal game foot controller that sends key strokes to open up an effects send and send signal to the Ellotronix. 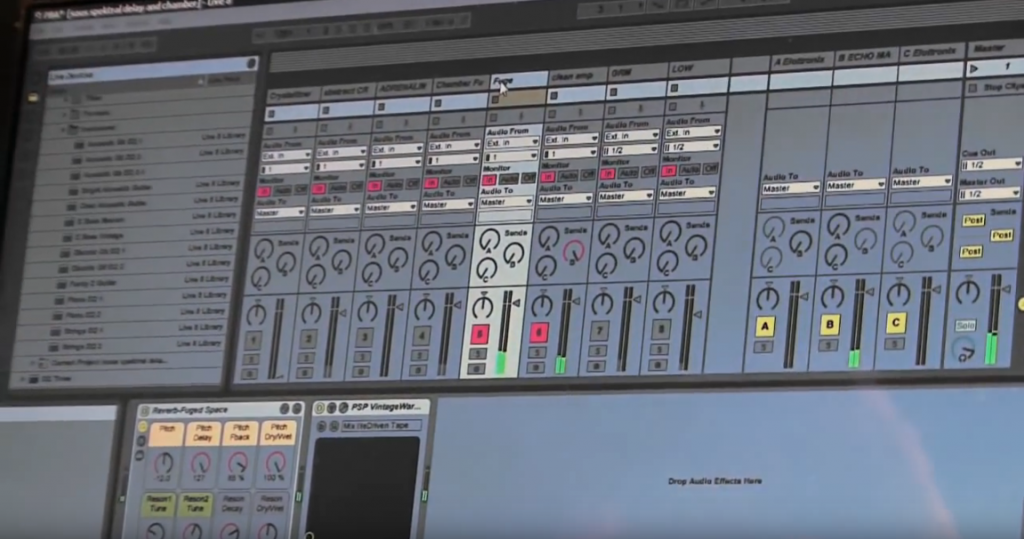 How do you have your effects set up? Are they all in returns or do you send it to separate channels?

I go into one main channel where I’ve got Amplitube’s Orange amp simulation on a very clean setting. From there I run about seven different channels. All those channels get their signal from the main input channel, which has the guitar emulation. They all have different sets of effects and I used a Novation Launch control to select the different channels. From there, I can turn effects on and off using the knobs.

What are you using for an audio interface?

Is Scott running a similar system?

He’s on a Mac, I’m on a PC, but he’s using the same audio interface and running through Live.

How much of the music is composed and how much is improvised?

Do you set up any rules in advance or do you just start playing.

How about on the record, 10, was that a live performance recorded?

10 is different than anything we’ve done before. Most of our releases in the past are either full shows or snippets of live performance. For 10 we decided we to do a studio album. We got together and recorded over a weekend: two days recording and then a third day listening back to figure out which segments we wanted to use. From there, some songs were straight recordings, with no further processing. On other tracks we did overdubs, cut stuff up, moved segments around, and did things like taking a signal, running it into Melodyne to get MIDI information out of the audio. Then we would trigger different synths in the DAW, with that MIDI information. It was a fun studio album for us since we don’t normally get to play around with that stuff.

How did you make the steel drum type sounds on “Serpentariae?”

That’s a chopstick that’s woven in through my first three low strings, while I hit it with my thumb.

Were you doing some of that at The Standard?

There was no chopstick but I was hitting the strings with fingers, which got that rhythmic, low pulse thing going.

Every once in a while. Usually the stuff that sounds like a loop is going through the Ellotronix. I find with standard looping it can be challenging to get the timing right on rhythmic stuff. There’s no prerecorded stuff. We have done some shows where I have played some bird sounds that were recorded out in the back yard, or cicadas or something like that. Every couple of years I’ll throw in some nature sounds. But as far as the music goes, it’s all played right there.

Is the Ellotronix plug-in only a PC VST? Or is it available for Mac?

I think it’s just PC and it’s long out of production. [Editor’s note: It is still available but only as 32-bit Windows]

How do you feel your music is evolving?

It has continued to evolve every year. But the core will always be improvisation. it’ll be a mix between dark ambient and noise. I’ve started to use a bit more rhythm and arpeggiation. I think it’ll continue to evolve as our skill level evolves.

7 thoughts on “Spotlight: Duet for Theremin and Lap Steel”