In some ways, Daniele Principato is emblematic of the new breed of experimental guitarists. As The Auralab, he a prominent presence on YouTube, where he posts his process, as well as full shows. He has no website but is on Facebook. He is out of the Stian Westerhus school of often playing pedals as much as notes. He is also refreshingly forthright, as well as interesting, in his description of his relationship to music.

My father built speakers and tube amplifiers in the ’70s and my passion for audio came from seeing him transform a piece of wood into a beautiful speaker. I started listening to music at a very young age. My first love, which has endured over the years, was rock, but I listened to many genres. I formed my first band at around 13 years old, and played rock/metal up to 17 or 18. One day, by chance, I found an Atari 1040ST sampler in the instrument store, without knowing what it was. I bought it and, from then on, started to buy tools from week to week: mixer, outboard gear, and synths. Since those days, I have dedicated my entire life to production, composition, and recording live performances. I often change musical direction to include all the different facets of rock and electronic music.

What lead you to create experimental (non-mainstream) music?

I experienced many aspects of studio work, including work for other artists, musicians etc. I have known and worked with many people who play very different types of music than I do. I also worked for an electronic music label with a very mainstream direction. It all helped me understand many things in technical and human relationships, but it was not my world. Live music is very experimental; it evolves from moment to moment, and is oxygen for my life. It lets me externalize my feelings without barriers or plans. I seize what I feel at the time, and try to use the right sounds and tools to accomplish what goes through my mind. It can be anything, the unpredictability excites me. 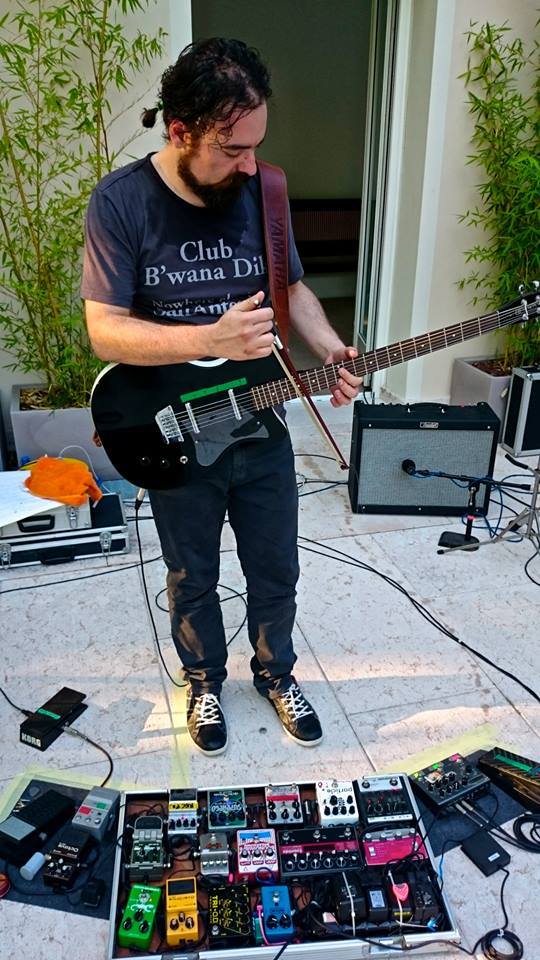 It is sound that inspires me, as well as people, feelings, and what happens in my life. Personal relationships, events—pleasant and unpleasant, are a wealth of stimuli to create. I love the music of the past and am still very attached to disks like Pink Floyd’s The Piper at the Gates of Dawn and Live at Pompeii; Miles Davis’ Bitches Brew, Aura, and In a Silent Way; Ralph MacDonald’s The Path, and Franco Battiato’s Pollution, also many soundtracks like the music of Ennio Morricone. Actors like Ugo Tognazzi inspire me a lot, but also nature. I love listening to Norwegian music. I feel fulfilled listening to contemporary music by artists such as Nils Petter Molvaer, Eivind Aarset, Stian Westerhus, Sidsel Endersen, Elbiorg Ereiki, Arne Hiorth and Oddrun Eikli. I also love music that happens by chance, maybe in the evenings, where there are groups of artists.

Mistakes, like trying to follow paths that were initially attractive, but left me with a sense of inner emptiness. Over the years, I felt this lack while I tried to find my way. At some point I decided to do only what I like, without compromise. It was a very natural path; I had to acknowledge step by step what to keep and what to let go of.

I try to be honest with myself; I play what I live, the emotions I feel, and also what I see in my surroundings, and the Earth. In doing so, I can see myself through music, understand my nature, how I react to unexpected events. I like to capture the moment when something is explosive in me, whether it’s pain or joy. I call it “sound-spelling” because when I play I try to heal through meditation and loops of sound that have a beneficial impact on the physical body and state of mind. When I cannot, then I try to externalize the contrary discomfort, anger, and disappointment.

My first guitar—at the age of 8—was a 12-string. I don’t have it anymore. It was an acoustic instrument, a magical tool that taught me to listen. The sound of the acoustic guitar is visceral in the human body, and I use that to create. My guitar of the moment is a guitar I feel deeply akin to, the Danelectro Baritone. I have used a Fender Stratocaster Standard. I have made several changes in the Fender, including a Piezo inserted in the wood. It opens the sound fully: not only the pickups, but also the wood, iron, plastic, everything is playable. I can range from melodic to percussion sounds. In addition, I changed the tone to make the sound as dark as possible, as a matter of personal taste. The sound is like magma, in that it moves sinuously and is dense. 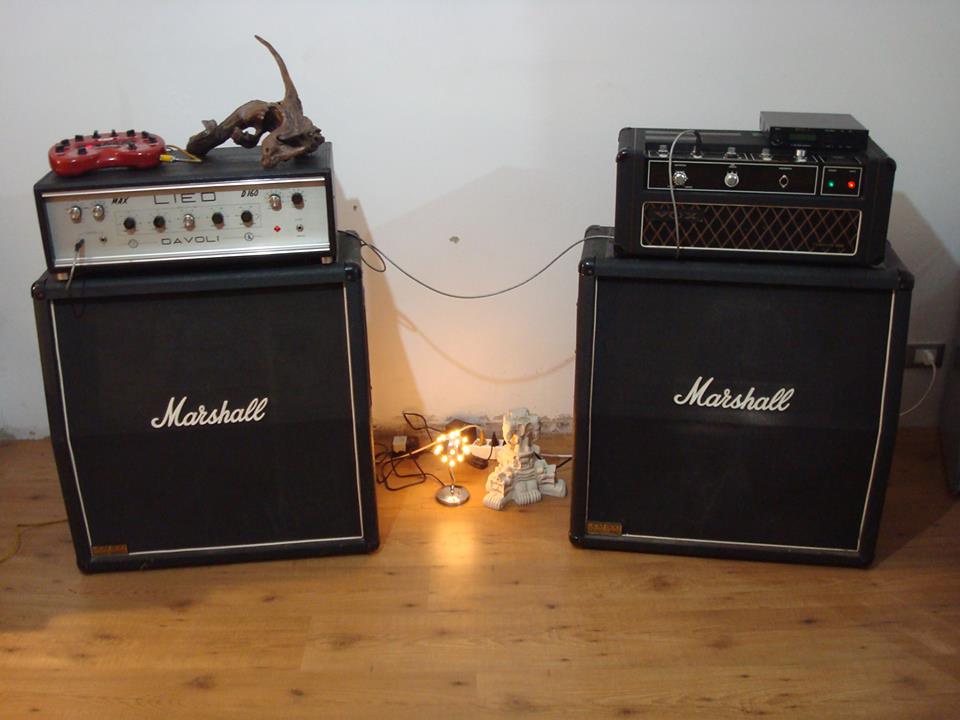 Two guitars used a lot in my disc Traveling Aimlessly were the Fernandes Revolver Sustainer and a beautiful Epiphone 335. I added a piece of string to the tailpiece on the Epiphone that can be used for resonance effects. I also added a pickup under the strings, by the tailpiece, so I get another output. It is still temporary, but I think it will become a fixed installation and I will add a switch to be able to mix the two sources. The Fernandes is very clear, clean, and precise, all things I do not usually like, but having the Sustainer system allows me to create unique backgrounds or textures. I darkened the tone, but it was not enough, so I use a pedal to further close the sound.

For amplification, I go stereo with mono central bass speakers. My favorite amp is a tube Davoli Lied 160 bass. I also use a transistor Vox Foundation Bass amp, a Farfisa TR70, and an Italian Geloso amp connected to an old Grundig speaker. I sometimes employ stereo hi fi amps like Pioneers and others. Lately I like to use two KRK studio monitors along with an amp. It varies, I might use a pair of solid state Fender FM 212s, and they sound very good.

For the effects, I prefer pedals; they offer instant access—you just turn knobs, and kick it on. In recent years there have been many new, really innovative pedals. Among my favorites are the Eventide Time Factor, Strymon Timeline, Hexe Revolver, Red Panda Particle, EHX Superego, and the AdrenaLinn. Old but fantastic pedals are the Boss OD3, the Palmer Kaput, a Maxon Distortion pedal I have from the ’90s. My absolute favorite amp simulator is the TriOD from Tech 21. I like to also try tools created for other contexts, such as the Red Sound SoundBITE samplers used by DJs, the Kaoss Pad effects, and the Alesis AIR FX and Bitrman (which I love)! 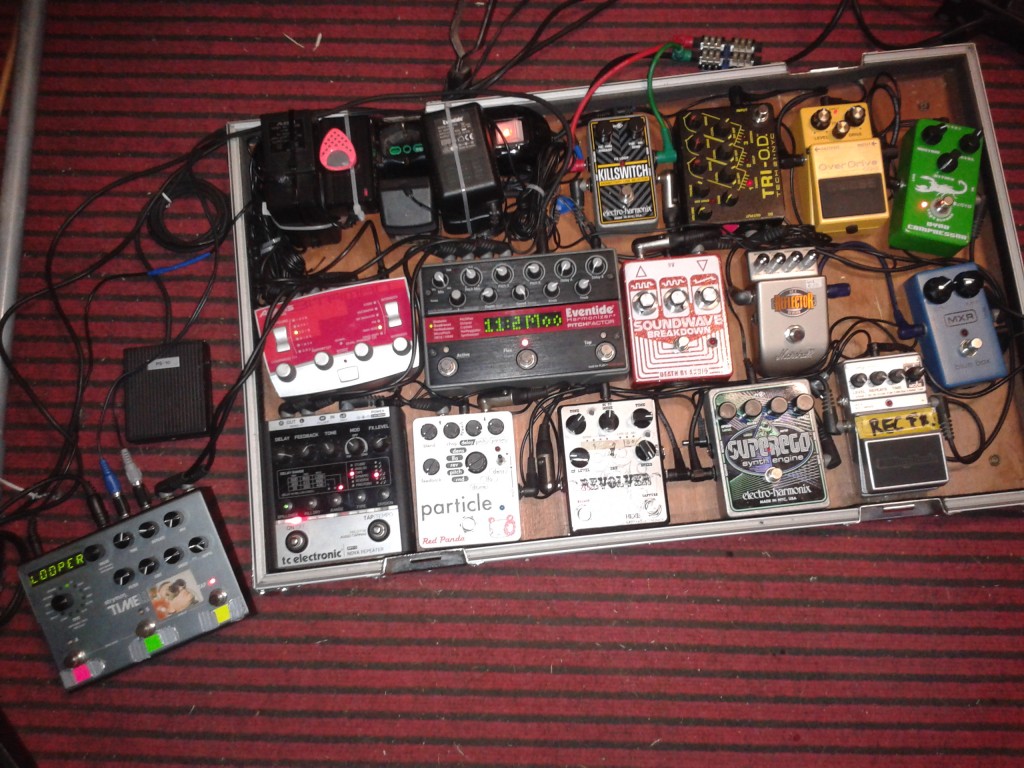 To record, I use Logic Audio from 1999. I recently tested software and freeware plugins, but I prefer analog outboard gear. I record through a Focusrite ISA 215 mic pre, and Soundcraft TS 24 board. I love the Lexicon 480L reverb (dreamsmachine). It has a unique sound.

Very often, I will put the guitar signal through a synth. On Traveling Aimlessly I used the Korg MS20 filter. This old synth is fabulous! I also use the Moog Voyager to process the sounds, like the percussive parts made with Piezo on the Fender. I often like to sample the sound of guitar into an old Roland S330—a great sampler, or other samplers like the Logic ESX24, Roland SP808/555, Akai S900, Yamaha SU10, and then create rhythm patterns on the sequencer with the guitar as the source. The result is very interesting and the work is challenging and fun, live or in the studio. 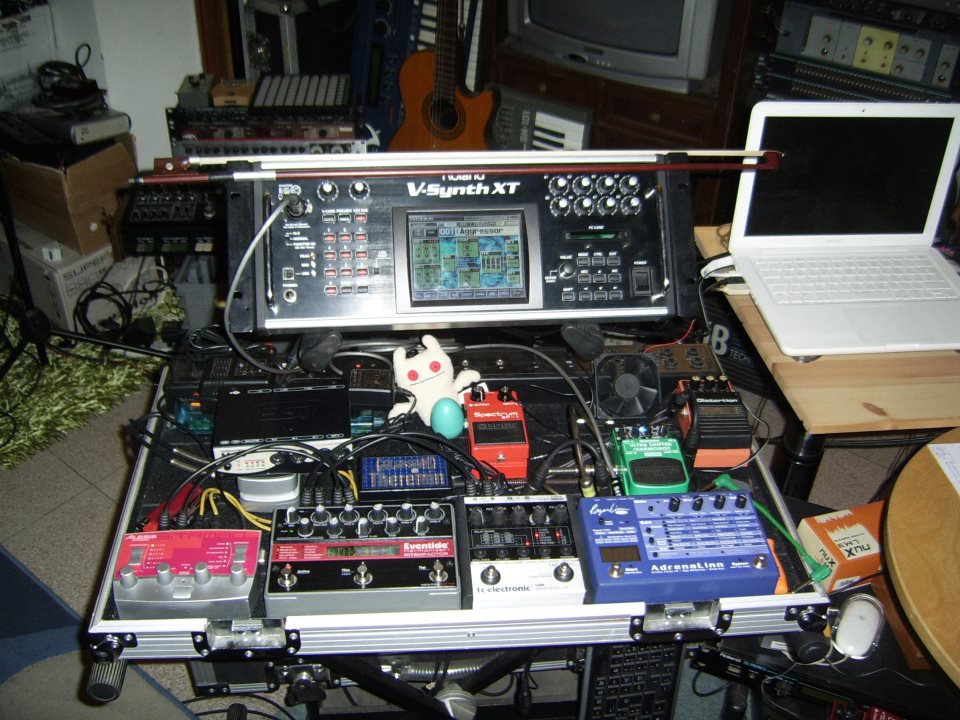 They are similar and very different worlds at the same time. I love them both. The challenge for years has been bringing to the stage what you do in the studio, not just in terms of sound, but also the mood that gives birth to an idea. When I record, I sometimes forget to eat and sleep. Through research, execution, recording, and mixing, something that comes in one way magically becomes another—it’s beautiful. It would be nice to bring all the instruments on stage and play everything live, but it is very difficult to do, so I often have to downsize and carefully choose the instruments most suited to the gig.

The audience is always changing from one concert to another. It is beautiful to be remembered in some way, and to find, over the years, some people who appreciate the music and become followers. 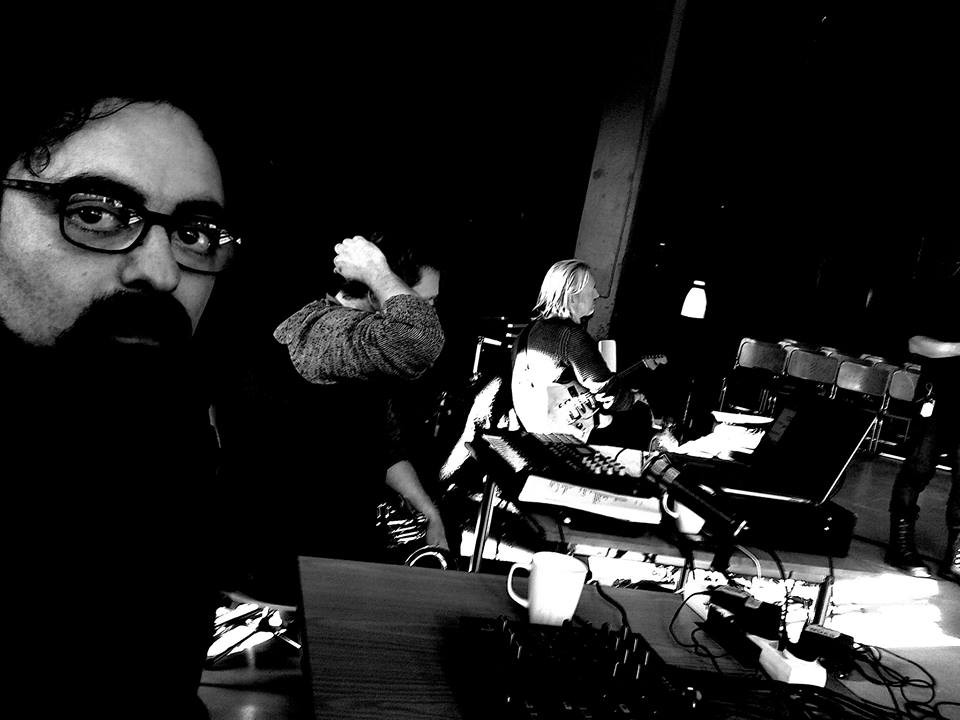 Arne Hiorth I are working on a new project for 2016, with the theme derived from the Eldmessa , and a concert in Iceland in the cathedral of Raikyevik, I think it will be another great experience.