I admit to a previous prejudice against solo bass efforts. My feeling had been: if you want to solo, play a solo instrument—something I had trouble considering the bass to truly be. A few bassists have begun to change my mind: Victor Wooten’s soulful and musical live performances; Steve Lawson’s awesome looping work, and now Sicilian six-string bassist Daniele Camarda’s unique approach.

Camarda employs the astounding technique and great tone that allowed him to hang with jazz luminaries like Avishai Cohen, Chris Cheek, and Daniel Zamir, in the service of a modern style that includes echoes of world music, classical guitar, minimalism, electronica, and jazz. It is all there on his new solo outing Sound Act. I have included samples of two tunes from that record, as well as live videos. Camarda fears the live performances represent places from which he has moved on, whereas I felt strongly they would still be of great interest to Guitar Moderne readers. I am proud to present Daniele Camarda as Guitar Moderne’s first bass player spotlight.

It’s hard to consider yourself proficient working in a realm such as music and art in general, but I would say I started playing guitar at age nine, studying with a jazz instructor. Around that time my main influences were Jim Hall (especially Undercurrent and Intermodulation in duo with Bill Evans) and John Scofield. I was also listening to Glenn Gould’s Bach interpretations, Stan Kenton, Charlie Parker, Duke Ellington, John Coltrane, Red Garland, Charles Mingus, Thelonious Monk, early Weather Report, and some of Miles Davis’ recording from the ’80’s, Jimi Hendrix, Led Zeppelin, Fabrizio De Andrè, and Bob Marley.

While in high school, I started investing money from my first gigs into records. I discovered Ravi Shankar, Eberhard Weber (which was the first instance of a looping musician I’d heard), David Torn, Oregon, John Coltrane, Igor Stravinsky. Around that time, I switched from guitar to six-string bass and started exploring that instrument, inspired by Anthony Jackson, John Paul Jones, and Jaco Pastorius. Later, while at the Berklee College of Music in ’98, I dove deeply into all kinds of music and the discographies of the great jazz masters, getting a broader understanding of their creative output and its development. I also listened voraciously to music coming from any corner of the globe, plus a lot of Arvo Part, Yannis Xenakis, Giya Kancheli, Olivier Messiaen, and all the music that was happening at that time in New York around John Zorn and his club, Tonic. 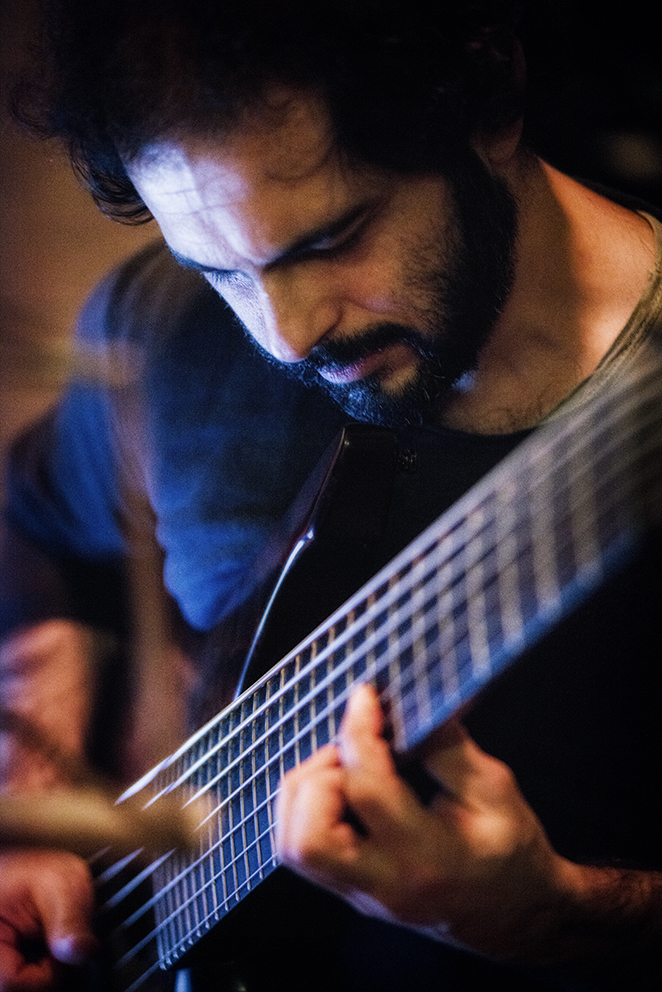 I come from Messina in Sicily, which used to have a rock scene but no jazz scene really. When I got a scholarship and moved to Boston, it was a great shift, and an opportunity to finally share my love for music with a lot of other people. I began playing with musicians from all over. We shared ideas and nurtured each other’s growth. I got to play in a lot of different settings, from modern jazz, to film scoring sessions, jingles, pop, playing in big bands, tracking bass lines for djs, accompanying singers—it was a really formative time. When I was about to move out of Boston into New York I was offered a chance to record an album with producer (composer Emanuele De Raymondi), who promoted the idea for me to play alone. That felt like the perfect time to take go deeper into myself and question what my inner voice was truly urging me to channel.

The work of choreographers Pina Bausch and Merce Cunningham, as well of painters Mark Rothko and Gerard Richter have also been a major inspiration in recent years, as well as Andrei Tarkovsky’s and Stanley Kubrick’s movies, which I have been watching and studying for many years now.

It has been a very slow evolution; I would say the starting point was in 2000, when I got my first looping device, which changed the game for me. I was in Boston, looking for an Electro-Harmonix Memory Man, but never was able to get one. I heard about a new looper Line 6 was about to launch: the DL4. I got it the same day it was in stores and started experimenting right away—it was an immense inspiration. I loved all the different textures and peculiar sounds I could get out of its basic functions, it felt like I was diving into sound instead of just playing the bass. What I didn’t dig was, in order to get those sounds, I had to go through a looping process and deal with repeated audio fragments. I was approaching it more as a real time sampler, but, by dealing with its limits, I forged the basics of my current style, from a sonic perspective. After Boston, I moved to NY and was exposed to a huge variety of music both as a listener and a performer.

I lived there a couple of years, until a gig brought me to India for a few months. Since then I felt a deep urge to roam the planet and play with musicians from different cultures in their own environment, to deepen my musical training with an anthropological awareness. Any time a gig would bring me to a new territory, I would spend a few months playing locally. My style evolved by blending those influences and interests, combined with love for improvisation or channeling, as I prefer to call it.  More than feeling I’m getting “better” at what I do I feel I’m going deeper, moving toward the core, more essential.

I like to become an extension of the instrument; to access a space from which to let my self to be played, to let music be the manifestation of worlds.

I’m using instruments designed and built for me by Andrea Ballarin of Manne Guitars. They feature chambered bodies, Piezo pickups, and a unique on-board electronic system that allows me resistance and capacitance load control. It affects how the passive tone works, so the entire tonal response of the instrument goes from pure Piezo sound to different tone curves and hi frequencies rolled off. The circuit is completely passive, while the Piezo sports a very transparent, high quality, active preamp. I have a few different models with different scale lengths and tunings—wonderful instruments, the very core of my sound. I used to prepare the instruments but I’m doing it less nowadays. I use different kind of picks, including self-made ones and oud picks. From the instrument, I enter my laptop through an RME Fireface 400 audio interface, into Ableton Live. I used to run the Moebius looper plug-in, which can do pretty much anything as long as you program it. Recently I’m using less looping and use a modified version of the Live looper. It is basically a Live Rack with two Loopers in it, in sync. They record, play, overdub, and stop in unison. An LFO or an envelope follower routs the incoming signal to either one or the other. Based on my touch or on the LFO’s behavior the signal shifts between one or the other Looper. Whatever I record is going to play back identically but is chopped and sliced in between the two Loopers, so if I mute one, process it, reverse it, stretch it, or pitch shift it, the other one is going to play the other segment identically. I also use some Max for Live devices and a bunch of external plugs, mostly waveshapers and convolutors.

I enjoy both environments immensely. I love the ritual aspect of the live concert, the possibility of using the audience as an energy field, as an antenna; letting it be part of what becomes a co-creation. Studio work allows me to experiment and explore from a sonic perspective, ponder, evaluate, and make choices. Nowadays, the two dimensions are feeding back into each other; since the laptop allows me to bring a keen sonic treatment into an improvised live setting.

By word of mouth, playing concerts and through the internet.

Right now I’m starting to play more solo concerts; it’s definitely a dimension I want to nurture. I’m in the process of writing for my own ensemble; I might record it by the end of the year. All records are available via the usual digital platforms: Bandcamp, iTunes, Amazon, CD Baby and so on. For my solo work as well as my sideman collaborations you can get info by following me on Facebook or on my website.