Chicago is too often overlooked as a center for jazz and other improvised music. The fact that Dan Phillips has chosen to make this Midwest city his base of operations has done nothing to hamper his music. Having gathered a coterie of like minds, he records and plays live with multiple projects in the Windy City. Throughout these various ensembles, his co-designed custom instrument affords him that most valuable of assets, a distinctive sound, which draws you into his music wherever he chooses to take it.

When I started the guitar, I was already interested in jazz but I was a drummer first and was playing some progressive rock and fusion styles on the drums. I also dabbled with keyboards but was more interested in making electronic noises with synthesizers than really playing the instrument.

I always knew mainstream jazz would not fulfill all my creative needs. From the beginning of playing guitar I was writing music and it was clear what I was writing wasn’t mainstream. I was working hard to get my jazz improvisation chops together and spending a great deal of time with bop and post-bop material. Listening to post bop jazz music, I heard late-era Coltrane and absolutely loved it. From there, I was able to get to Albert Ayler, Ornette Coleman and Sam Rivers, among many others.

There is so much music I dig that it’s hard to know where to begin. When music is honest and sincere it always gets to me. If it’s personal, originality will follow. There is a sense that the artist is searching, on a personal journey of sorts through their art, and it is one we get to share. Lately I have been listening to Wadada Leo Smith, Eric Revis, Sam Rivers, Muhal Richard Abrams, Nate Wooley, Peter Brotzman, and Roscoe Mitchell, among many others. My listening goes through phases; lately I have been focused on the blend of composition and open improvisation. I struggle with music that is too concerned with style and largely derivative, but there are exceptions.

My progress, like that of most musicians, is a result of having played for many years. Also, having had the privilege of working with musicians who challenge and inspire me, particularly the various projects I now have in Chicago. The guys in the Chicago Edge Ensemble have inspired my writing and playing in a big way.

I try to be honest and express who I am and my world view as best I can. This is not easy and I am not sure I am always successful but it’s what I am trying to do. When I write and perform music much of my experience in life comes into play. Life and art are impossible for me to separate, and I frankly don’t want to try.

I mostly play my Victor Baker guitar these days. I designed it with Victor’s help. It is everything I couldn’t get from off the shelf guitars. It’s basically an ergonomic, headless archtop guitar.

Effects change all the time, but lately I have been using the Eventide H9, Zendrive, EH Freeze, Strymon Timeline, Aleks K Production Honey Moon Sweet Overdrive 2, and a Lehle Volume Pedal. Sometimes, depending on what I am going for, I just bypass it all and play straight into an amp. I mainly use an Acoustic Image Amp and a 12″ speaker cabinet these days. I have a nice Class A tube amp, but I rarely want to carry that heavy thing around to gigs. 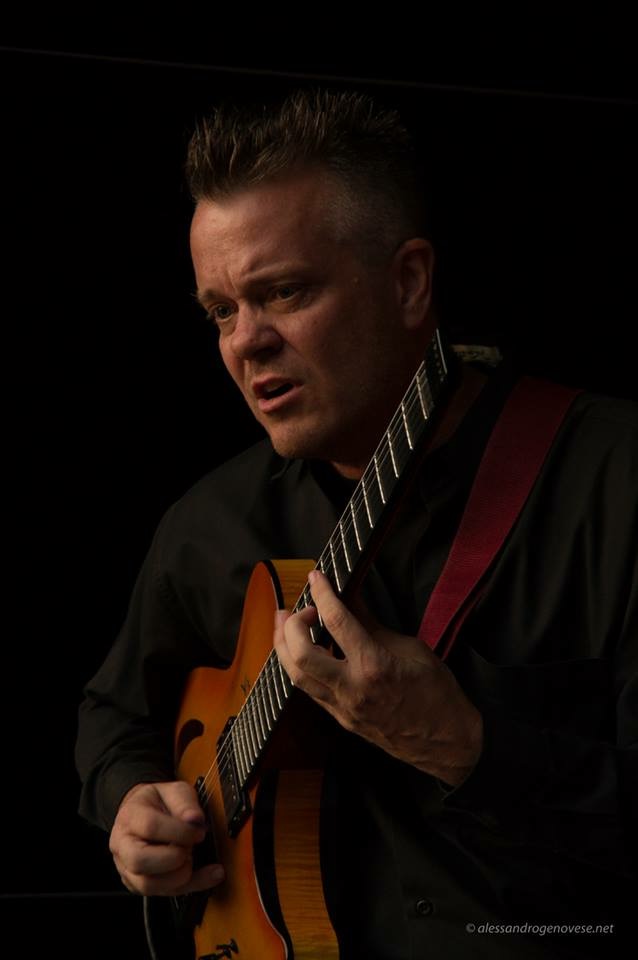 Live is definitely more wide open and natural for me. When I record my music it is usually live in the studio, but there is pressure to get things done within a time frame and it is therefore stressful. Playing in the studio feels a bit unnatural, but when I am playing with great players we can still get into it okay. Live performance is very much affected by the venue, audience, sound travel issues, etc. It’s more of a wild card but I love to see how an ensemble reacts differently to each live situation.

I have been at this a long time now, so there are some folks who like the work and support it. If nobody liked it, I would need to do it anyway, so it’s not my biggest concern. I just keep plugging away and making music.

I have been focused on getting back to playing with the Chicago musicians I admire a great deal. Fortunately, I have been able to work with many of them, of late. Hamid Drake, Mars Williams, Krzysztof Pabian, and Jeb Bishop are important musicians to me. They are in my group Chicago Edge Ensemble, which is a highlight of my life. There are many more, like Tim Daisy, Michael Zerang, Dave Rempis, Avreeayl Ra, and Jim Baker that I have already worked with or will be working with soon. I played many years ago with former Chicago drummer Chad Taylor and would like to play with him again. I am really digging bassist Eric Revis’ playing and writing and it would be great to work with him someday. I still love Jim Black’s drumming also. I want to work with so many young guys in the Chicago scene.

I just released a quartet recording, Converging Tributaries, with Jeb Bishop, Tim Daisy and Krzysztof Pabian in October. It is a mix of compositions and group improvisations. I have a trio recording with Tim and Krzysztof that will be coming out in a couple of months. I also have a new Chicago Edge Ensemble Recording that was recorded over the summer and in process now, perhaps for a spring release and there is a duo recording with Hamid Drake that I would like to get out next year. I have a series of quartet gigs with some of Chicago’s finest in December. Maybe a future recording will come of that.

My music is available at the usual download and streaming sites: iTunes, Amazon, Bandcamp, and CD Baby.