Swedish-born Anders Nilsson keeps popping up on Guitar Moderne. He was part of the Derek Bailey tribute as well as the DMG party. He is also part of the Scandinavian theme that seems to be running through recent posts, joining Norwegians Terje Rypdal and Stian Westerhus in the Nordic tradition of “all genres are grist for the mill” guitar playing. His solo release, Night Guitar, ranges through quiet, lyrical meditations (“Meet Me in the Back Alley”), noise inflected atmospheres (“Breakfast Boogie Nightmare Ballad”), and Zappa meets metal fuzz fests (“Nocturne). The bio on his website delineates an interesting progression, with some wise words about the musical arts. Here he discusses some influences and processes. 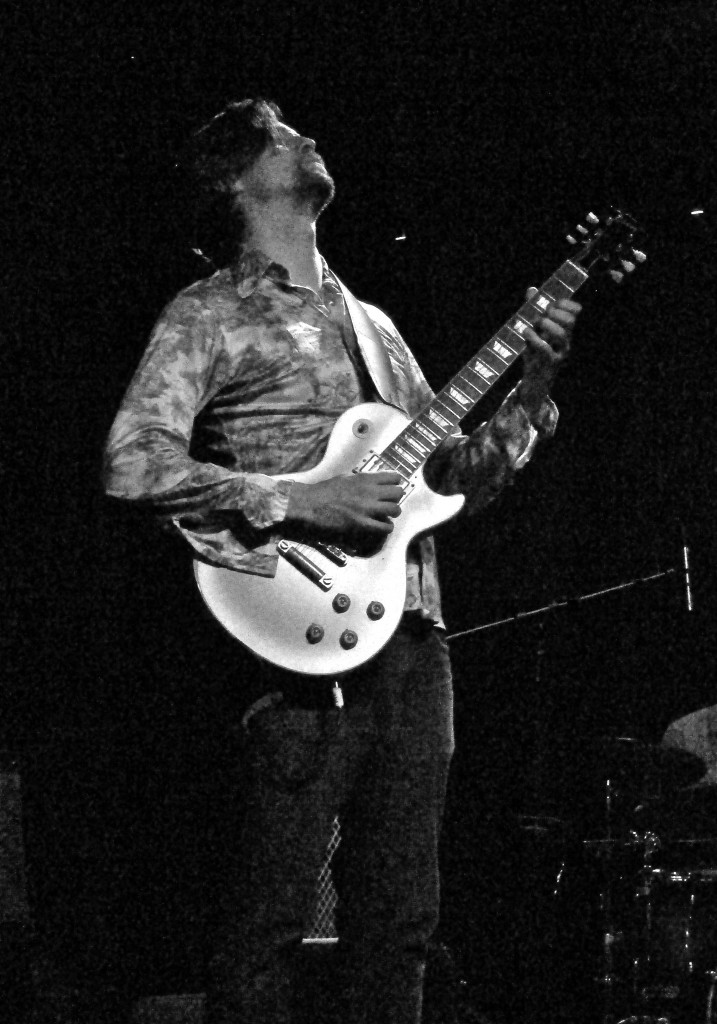 With influences like some of the artists above, plus an insatiable hunger for music, it’s a natural trajectory. To me, feeling engaged playing garage rock, and later taking part in eye-opening free form jams on a regular basis, shared similar vibes. I found I was attracted to exploring, playing with an edge and expressiveness.

By learning to care for the sounds I put into being, playing with other risk-takers who I respect, studying styles outside of my current style, mindful practicing, composing, trusting my instincts, longevity.

My desire is to create atmosphere and tension that trigger the individual listener’s mind to create its own storyline. To create something which I believe includes: consistently caring about the sounds I’m making, aiming beyond what I know, leaving the perfunctory behind, welcoming new discoveries.

My main axe is a Les Paul Goldtop, which I use to resonate, growl, as well as pierce through a whole herd of players at will. I own about 10 pedals. On my overdubbed solo album Night Guitar www.soundatone.com, I use a plethora of pedals and a variety of tube amps. For example on “Ax to Grind”, I played through a THD head in to an Ampeg cabinet using various types of distortion separately and jointly; HBE Ultimate Fuzz Octave, Electro-Harmonix Double Muff, ZVEX Box of Metal, Fender Blender, and an Electro-Harmonix Small Stone phase shifter, plus a Dunlop Dimebag Cry Baby from Hell wah-wah pedal in order to create a beehive-like sound.

Although I thoroughly enjoy running with the possibilities of the studio when making Night Guitar and other albums, performing live is as direct and rewarding as it gets!

At live shows, through friends and acquaintances, some through reviews or coverage in the media. Some bought an album or heard a recording online or on the radio.

I’d like to explore some unusual instrument combinations, for example right now I’m working on a piece called “Pick-up” for electric guitar, Theremin, and chimes—an ethereal line-up stolen from a restaurant scene in Charles Willeford’s novel by the same name. The piece will be premiered September 15th at the Firehouse Space in Brooklyn. I’d also like to collaborate more with filmmakers because I find that I like creating music that has an “extra musical” suspense soundtrack character.

Kalabalik with Raoul Bjorkenheim on guitars, and Gerald Cleaver drums is out on DMG/ARC 2012 available through Downtown Music Gallery. Upcoming albums include a trio with Joe Fonda, bass, and my brother Peter Nilsson, drums, on Konnex Records later this year. Hot & Cold is an electric guitar duo album with Aaron Dugan. We wrote the music together. The album consists of two suites and an homage piece to Albert Ayler. It is due out on Jungulous Records later this year,  and keep an eye out for the album Hogwild Manifesto

The music video “Fleets cove” by Arrien Zinghini set to my piece “Breakfast Boogie/Nightmare Ballad” off the Night Guitar album: