I became professional at age 23, when I started making money as the guitarist of a commercially successful pop/rock band in Hungary. Rock music is what made me pick up the guitar at age 10, but I forced myself to listen to and study jazz because of its complexity. I studied jazz but wasn’t happy with the institutionalized teaching of music. For a kid in Eastern Europe, having a hard time understanding jazz, and struggling to find a musical identity through a tradition so remote and foreign, is completely natural. I tried hard but never became a bebop guy. Not that I mind now. The moment I let that go I started to feel the freedom in improvisation.

I didn’t belong to the circle of young jazz players and felt like an outsider in the pop/rock scene. This led to developing a kind of punk attitude, being in opposition to the system, and questioning the paradigm on all levels. My curiosity about new musical territories turned me into an admirer of sounds. I’ve been always interested in playing the instrument in a non-traditional way, and I was simply blown away with the raw energy and in-the-moment aesthetic of freely improvised music. I will never forget the first time I played free improv with some like-minded young players. It was like the guilty pleasure of kissing or trying drugs for the first time.

Influences came from discovering players who were very different from what I had heard before: David Fiuczynski was a revelation, with his crossover work that built bridges between rock and avant-garde; also guitarists like Marc Ribot, Nels Cline, Sonny Sharrock, and Derek Bailey. Other instrumentalists followed. The contemporary Nordic jazz scene blew me away. Lately, I turn mostly to folk music for inspiration. African and South Eastern Asian music completely rewire the way I sense rhythm and tonality.

It’s always about pushing myself towards new things as a player and as a listener. Being a good listener is key. It’s necessary to be in full control of the instrument in order to obtain flawless communication, but I try hard to look at the instrument like it is the first time every time. Being in the moment also means that it’s like the last time and there’s no second chance. When I am aware of this, I need to be clear and informative without any hesitation—but trying too hard should be avoided as well.

For me, music is a vehicle to a different state of mind, discovering my inner self. It is about building connections to the musicians I play with and the audience that are more abstract and emotion-based than the usual communication forms. This is the inner aspect; the outer aspect is to relax myself, my fellow musicians, and the audience in a time when people are less and less connected emotionally.

I’m pretty far from being a gear geek. My equipment is full of problems I deal with all the time, which moves me out of my comfort zone, but comfort is not what I’m looking for. At the moment my arsenal is minimalistic 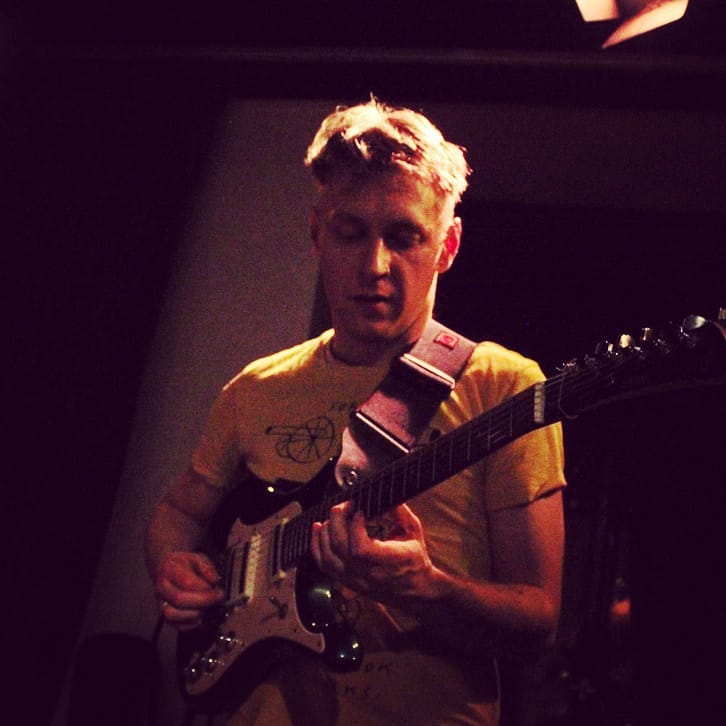 I love weird looking guitars. I only have one right now: a Yamaha SGV-300. It cannot be perfectly adjusted anymore because some parts of the bridge are missing. I like its unique pickup configuration and the vibrato, but I’ve lost the vibrato bar. I am pretty keen on cheap guitars. I had a Squier Jaguar for a few months. I liked the variability of the pickups, and the fact that I could use the upper switch as a killswitch. 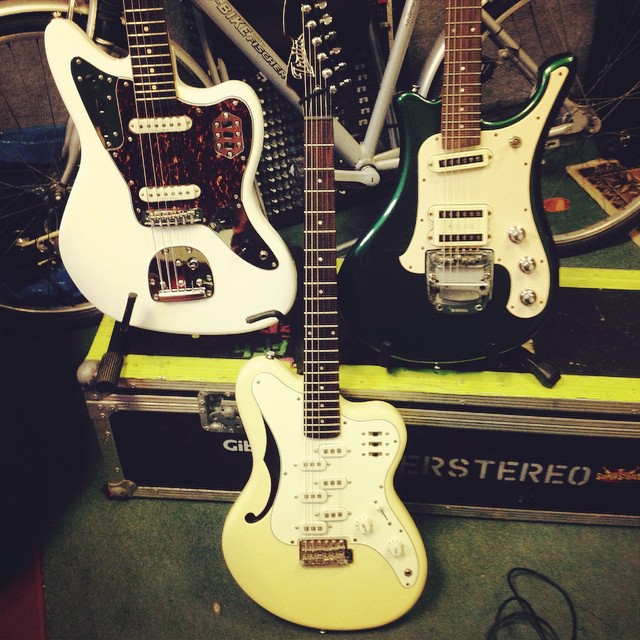 There was a period of time when I bought and sold guitars like crazy looking for the Holy Grail. I put my hands on some nice pieces. I had this Eastwood Hummingbird https://eastwoodguitars.com/products/hummingbird, which was a copy of the Tokai Hummingbird from the 60s. I like how Eastwood started remaking long forgotten guitar models from decades ago. That one was a true beast with P90 pickups. It was worth wrestling with. I don’t even know why I sold it. Another guitar I regret selling was an Italia Imola with impossible pickups, a reverse headstock and a nice vibrato. I had to sell it when I moved to Berlin, Germany as I had too many guitars and little money. I like guitars with a strong character because they put me in a specific situation that I have to deal with.

I use a multieffects unit because that is how I learned about guitar effects. I bought a Boss GT6 15-years ago, when I knew nothing, because it was affordable. Now I have a Line 6 Pod HD500 in questionable condition, but I like the sound and the versatility. I understand that’s a provocation for the analog guys, so again we are talking about going against the stream.

I prefer full tube amps, but I’m ready to play anything. LoFi sound can be inspiring. It’s more about achieving a sound I can produce without extending the army of tools. The less gadgets I depend on, the happier I can be.

Playing live is the real thing because of the aforementioned state it puts me in, and because of its interpersonal aspects. Recording is more about the futility of carving something in stone that is constantly moving; it is a great exercise. You make a moment stand still and compose around it. It’s like a message to the future about the moment when you record. I like the joy of creating riffs the most. They are like memes. I try to make them informative enough to still contain some thoughts when they are removed from their original context.

The old fashioned way of being out there and playing gigs is still primary. The white noise of overflowing information makes the Internet come second. Still, both are essential.

The outcome of the elections in Hungary, where the fear and hate-mongering rhetoric of the ruling party has won, made me think about how to emphasize the importance of love and consciousness in a more direct way. I’m thinking more about conceptual art forms. For example, it would be nice to create performances by teaming up with theater groups, writers, or artists from different fields; getting together with like-minded people, not only to see that they exist, but to show that we exist together with the same values. Though I’ve done something similar before, but now it is more important.

In the last few months, I have taken some time off from improv music to write a rock album that pays homage to the music I listened to as a teenager. It has lots of guitars. I’m about 70% done writing it and am planning to record it later this year.

We are about to start working on new material for the third Jü album as well. We started the band about five years ago through a shared interest in minimalistic, repetitive, trance-like, polyrhythmic grooves. We have come a long way since then. Our goal is to create a musical language that offers balance between improvisation and composition. The flow of the music is always open but we use certain phrases as signs.

We have two albums out on the London-based label RareNoise Records. The first one has Norwegian saxophone player Kjetil Møster (Ultralyd, Datarock, Royksopp, The End, etc.). I’m excited to start working on the third album as soon as the other two band members come back from Africa later this month. Both records will come out in 2019. Lately I’m pretty busy with teaching guitar, which I enjoy a lot. Learning to play a new instrument is also on my list. I have been thinking about the violin.