Sarah Lipstate has become something of a modern guitar superstar. Between opening for major acts, demoing the coolest products at NAMM, and her raft of distinctive ambient records as Noveller, she has proved a master (mistress?) of the looper. Her records reveal a serious composer, and through her Instagram page has proved she can geek out about gear with the best of them. Here she talks about how she made the excellent Arrow, which you should pick up immediately at Bandcamp.

With all the touring you have been doing the last couple of years with St. Vincent and Iggy Pop, when did you find time to compose Arrow?

My tours with St. Vincent and Iggy were definitely career highlights for me! I wrote the music for Arrow in 2018. I did a lot of touring in 2017 opening for Wire, Helium, and touring solo in Europe, so I decided to take a break from the road the following year and focus on writing a new album.

Are all the sounds generated by guitar or are you using keyboards and other things to create them as well?

As always, the guitar is the main sound source throughout the album. The tracks “Pattern Recognition” and “Canyons” were created using solely guitar and effects (the latter was created using my signature pedal the Moon Canyon). I used my Folktek Nano Garden electro-acoustic instrument on the opening track, “Rune.” The second track, “Effektology,” features Omnichord and the Moog Mother 32 semi-modular synth. You can hear the Moog Mother 32 on the tracks “Pre-fabled,” “Thorns,” and “Remainder” as well. The track “Zeaxanthin” features the Moog Mother 32 and also the Moog DFAM semi-modular synth. 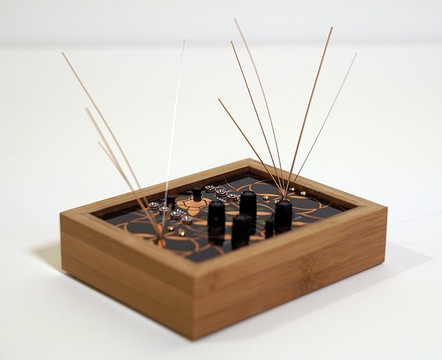 Which guitar(s) are you using these days?

My main guitars are the Fender American Professional Series Jazzmaster and my custom BiLT Relevator with built-in effects. The Relevator is a newer acquisition so it wasn’t used on the album. I used the Jazzmaster on Arrow and also the Fender Ed O’Brien signature Strat with the sustainer pickup. Last year, I installed a Gizmotron on the Strat so I’ve been using that lately for scoring projects. During the lock-down I found myself exclusively playing the Troy Van Leeuwen signature Yamaha SA503.

You must have an enormous number of pedals at this point. Do the pedals inspire musical ideas or do you have an idea and then search out the pedal in your collection that will best execute it?

Most of my ideas come out of experimentation with my pedals. I setup a board and then improvise. When things start sounding cool, I hit record and see what happens. I’ll start grabbing pedals later in the process of shaping a composition to try and get a specific sound that I’m hearing in my head. I try to keep all of my pedals out on display in my studio so it’s easy to find what I’m looking for and throw it onto my board. 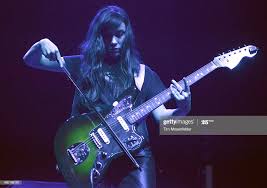 What are some of your favorites?

I have a lot that are staples on my board because they’re really good at what they do and absolutely necessary for my sound: EHX Pitchfork, Eventide H9, and the Boomerang III Phrase Sampler. Those pedals might as well be glued to my board. The pedals that I always find myself grabbing when I’m looking for inspiration are the Montreal Assembly 856 for Zellersasn, Red Panda Particle, EHX Mel 9 and Synth 9, Gamechanger PLUS Pedal, Meris Polymoon and Mercury 7, EarthQuaker Devices Afterneath, Lovetone Ring Stinger, Spiral Electric FX Black Spiral Fuzz, and Chase Bliss Audio MOOD.

Do you still generate your ideas through looping?

Absolutely. My approach to writing is building layers of sound that interact in interesting ways. The Boomerang III Phrase Sampler is still the best for what I need out of a looper. It has a “Free” mode where all the loops are autonomous and can be whatever length you’d like. If I’m doing something that’s structured, I use “Sync” mode to set up a Master loop and have the subsequent loops synced to it. With the Boomerang, you have the option of varying the subsequent loop length by multiples of the Master loop which is a really fantastic feature.

Do you think about being able to reproduce these tracks live when composing them?

I don’t like to limit myself in that way when I’m recording. Coming up with a live arrangement of a piece is a whole thing unto itself and I view that process as an evolution of the composition.

Your work has always been cinematic, but Arrow feels like a soundtrack in spots, “Remainder” for example. Have you been doing soundtrack work and are there films that we can see?

The last score I did was for a theater production that got canceled because of the pandemic. Hopefully they’ll be able to make it happen in 2021. I released the score I did for an experimental documentary called When I Last Saw Jesse on my Bandcamp page this year so folks can check that out if they’re interested.

Which delay did you use on “Pattern Recognition” to set up the rhythmic pattern?

How do you create the massive low-end parts on some of these tunes.

For the low end I tend to pitch shift the EHX Synth 9 down an octave or two using the Pitchfork. For the track “Remainder,” I also used the DOD Meatbox with the Synth 9.  Once I’ve recorded the low-end tracks, I typically use the Waves LoAir Subharmonic Generator plug-in to really enhance those frequencies. 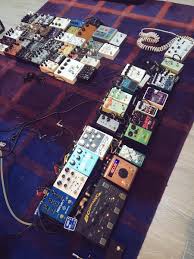 What software and interface are you using for recording?

Did you create any of the sounds using plug-ins? If so, which ones?

I use the Soundtoys plug-ins often, specifically Crystallizer, PanMan, and Little Radiator. I also use the Waves LoAir plug-in as I mentioned earlier. I like the Valhalla Ambience preset too. 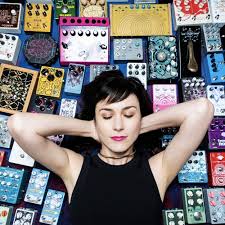 Do you mic amps or go direct through modeling software?

I record direct but ended up re-amping some of the tracks through my Fender ’59 Bassman reissue and ’68 Custom Deluxe Reverb.

Other than the weather, are there advantages to living in Los Angeles over New York?

I’m able to have a house with a home studio in LA, which is something that I’ve wanted for a long time. I don’t have any neighbors on my side of the street so I’m free to work on music whenever I like. I never had the ability to do that in Brooklyn so that’s a major advantage. There’s also nature and peace and quiet where I live. I love it!

What have you been doing during the lockdown?

I’ve been doing a lot of yoga. Yoga and puzzles mainly.

Do you plan to get out and perform anytime soon?

1 thought on “Sarah Speaks About Her New Noveller Record”