When Clinton Beale contacted me about a “new guitar gadget,” I was, as is my habit, skeptical. Hall E at NAMM is full of new guitar gadgets that are ill thought out at best and insane at worst. When I learned that it was a slide with one side that would emulate a sitar, my skepticism rose, but the videos on his site demonstrated sounds coming out of the East West Slide that seemed almost too good to be true. I had to check it out for myself. Clinton was kind enough to send me one for review. Along with it, he sent a three-page letter detailing some tips for using it and the process of making it.

Every slide is cast by hand, not mass-produced; so each has its own individual sound. The material used is a brass infused polymer hybrid specifically developed for the slide. It helps produce an accurate reproduction of the computer designed patent pending BCS surface developed for the sitar side.

The slide weighed in at around 26 grams (a little less than an ounce), so there was no need to raise my guitar’s action. The accompanying letter recommended I use a light touch and back off the volume of the guitar, also that I play straight into a mixing board and use a light pick. All this suggested to me a finicky product that might or might not produce the advertised result. 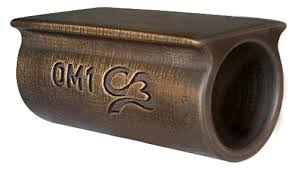 Imagine my surprise when I ignored most of the recommendations and still got an amazing, sitar-like sound the first time I used the East West Slide. Even with my 1965 Stratocaster unplugged I could hear that the thing really worked. When I plugged into my Focusrite recording interface and played the guitar into Ableton Live, I found I preferred the sound through a Studio Devil amp emulator plug-in with just a hair of dirt. I also used my thumb rather than a pick.

Does the East West Slide sound exactly like a sitar? Of course not. Does it sound as close as a Coral Sitar, or an EHX Ravish pedal? To my ears, in its own way, it pretty much does. The standard slide side also works pretty well, but you will have to decide if it will replace your current glass, ceramic, brass, or chrome version.

At almost $40 + shipping (at the current pound to dollar rate), the East West Slide is obviously expensive for a slide, but way cheaper than an electric sitar, or even a pedal (did I mention it works on acoustic guitar as well?). Add the convenience of not having to lug around a separate instrument or take up any pedalboard space and this new guitar gadget is actually a great idea and a bargain for anyone seeking to add a sitar-like sound to their pallet.