I was living in San Francisco, working part time at a vintage guitar shop, Real Guitars, and part time at Gary Brawer’s guitar repair shop, located in the back. On weekends, I was playing country music in a gay bar in Hayward, about 30 minutes south. Almost immediately after moving to the Bay Area in the mid-Eighties, I met David Phillips, who was working at Gary Brawer’s at the time. David was a pedal steel player, but not your typical one. He had taken up the instrument because he thought it would sound good on King Crimson tunes.

Listen closely at 1:30 and you will hear my patented “ghost-horse whinny” guitar.

Almost a decade later David came to me and said the guitarist in a band he was playing with had left. He asked if I would be interested in being the replacement and gave me a recording of the music to check out. It was unlike anything I had ever heard. I had always thought the pedal steel was an under-utilized instrument, capable of sounds, harmonies and textures way beyond the ones it produced in country music—wonderful though those might be. But here was David doing things I could never have imagined.

As it turned out, the male singer, Ben Guy (nee Guy Carson) also played bass in his own idiosyncratic style. He had played in the band Snakefinger and the Vestal Virgins with the amazing British guitarist Philip Lithman, and Eric Drew Feldman from Captain Beefheart’s band.

Snakefinger was part of a creative circle around Bay Area art-rockers, The Residents. Laurie Amat, the female singer in the Potato Eaters at that time, also came from that circle, having sung on their records. Drummer, Gino Robair, anchored the band. If that name sounds familiar, it might be because Gino has since edited Electronic Musician and now edits Keyboard magazine. Or, because he has gone on to be one of the most prominent free music performers in the world. He has since worked with Anthony Braxton, John Zorn, Nina Hagen, Terry Riley, Lou Harrison, John Butcher, Derek Bailey, Peter Kowald, Otomo Yoshihide, and the ROVA Saxophone Quartet. For the Potato Eaters, though, Gino was getting his rock drummer groove on.

After a few rehearsals, I was still unsure about the music. It was challenging and unique, but having to date played largely roots music (country blues, folk) with a five-year sidetrack into commercial pop, it was new territory for me. One thing I did know, I loved the people in the band. 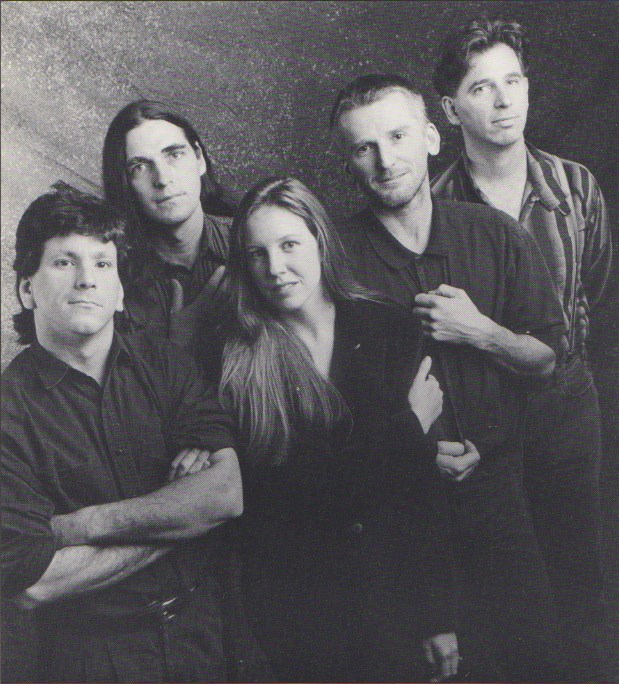 David and I were already firm friends; I had attended his wedding not long after meeting him and we had played some country gigs together (he had found, much as he might like King Crimson, you have to learn country music to learn the pedal steel). Guy was a solid, inventive bassist with great tone, and an intelligent, interesting man. Gino was a killer drummer with a direct manner that the New Yorker in me appreciated, especially after a decade of San Francisco’s passive-aggressive tendencies. Laurie was a spectacular singer, if something of a diva, but once again, the New Yorker in me appreciated “attitude” and we hit it off.

Eventually, however, Laurie failed to mesh with the others and we found ourselves looking for a replacement. Auditions were as amusing as you might imagine, until a striking blonde woman named Emily Bezar tried out. She had all of Laurie’s vocal chops, and serious piano training as well. Like Gino, Emily had a double degree in music and electronic music.

The problem was, she wasn’t sure she wanted to do it. At the time, she had operatic aspirations and was afraid singing in a rock band would hurt her voice. Thus began a courtship process, as there was no doubt she was perfect for the band. Eventually she acquiesced and proved her mettle at her first gig, in Capitola, California, near Santa Cruz. The stage wasn’t big enough to hold the whole band so Emily ended up on the floor in front. For much of the gig, a strange man stood directly in front of her, staring, but she didn’t flinch.

Through relentless rehearsal our motley crew soon cohered into powerful sound. As we all came from different music backgrounds, the process of putting the music together involved much negotiation. Guy wanted to infuse the band with the energy and abandon of punk groups like X, Gino was a prog fan and would play Gentle Giant tapes in the van. Emily added her classical background into the mix. David and I kept it rooted, while still enjoying the extensive experimentation that was encouraged. It was the kind of band where, when someone played a wrong note or chord and apologized, everyone else would say, “No, that was great do it again!”

We toured the West Coast, from Café Largo in Los Angeles, to Seattle, Washington, and eventually became big enough in San Francisco to nearly fill The Great American Music Hall’s 600-seat capacity. We made some polished, self produced CDs and had a lawyer pushing us to the majors. According to her, the young A&R guys loved the music, but when presented to the powers-that-be, the reaction would be: “No hits, too old” (we were all in our late twenties or thirties at the time).

After giving it our all for almost five years, we finally threw in the towel and parted friends. Emily went on to record a number of amazing records, on some of which I played guitar, synth, and samples.

David has appeared on records by Tom Waits and Charlie Hunter and now occasionally plays with rock stars like Jerry Cantrell and Kirk Hammett. Guy moved into the other end of the business, booking, managing, and eventually owning nightclubs in San Francisco. Gino we have discussed above.

I retreated to my roots, first playing with and producing a brilliant singer/songwriter, Jane Hardaway, who approached me based on attending a Potato Eaters show. Toward the end of my San Francisco tenure, I toured with and produced blues artist James Armstrong.

Though I had loved experimental music before joining the Potato Eaters, that band really opened my ears and my playing. I began looping with them and continued it through playing with Jane and others. But it was only after I stopped touring with James Armstrong and moved back to New York that I truly dove into electronic music and the use of guitar therein. The rest is Guitar Moderne.

5 thoughts on “Remembering The Potato Eaters”