Guitar Moderne Spotlight subject Florent Paris a/k/a/ Hors Sujet  , has been collaborating with ambient musicians Analog Weapon, Foot, and Andrea Gava under the auspices of Magpie Pirates to present YouTube concerts on a regular basis. The ambient nature of the music means that latency in not an issue. Freed from the constraint of having to be locked in rhythmically, they can play together in real time. Their next show will be Tuesday April 28th at 6pm UTC (convert that to your zone’s time here ).

Where are you located now?

Analog Weapon: Listening to my parents’ music, I was attracted to their “unconventional” records. I realized I just like sound in general, whether it is organized into a structure called “music” or not. The drone of the fan in the bathroom, the clangs and bangs from the metal foundry, etc. When I went to college in Madison, WI., I met my dear friend Clay Ruby (Burial Hex) who introduced me to a whole world of unconventional music. I spent time there making that type of music with all of my friends. 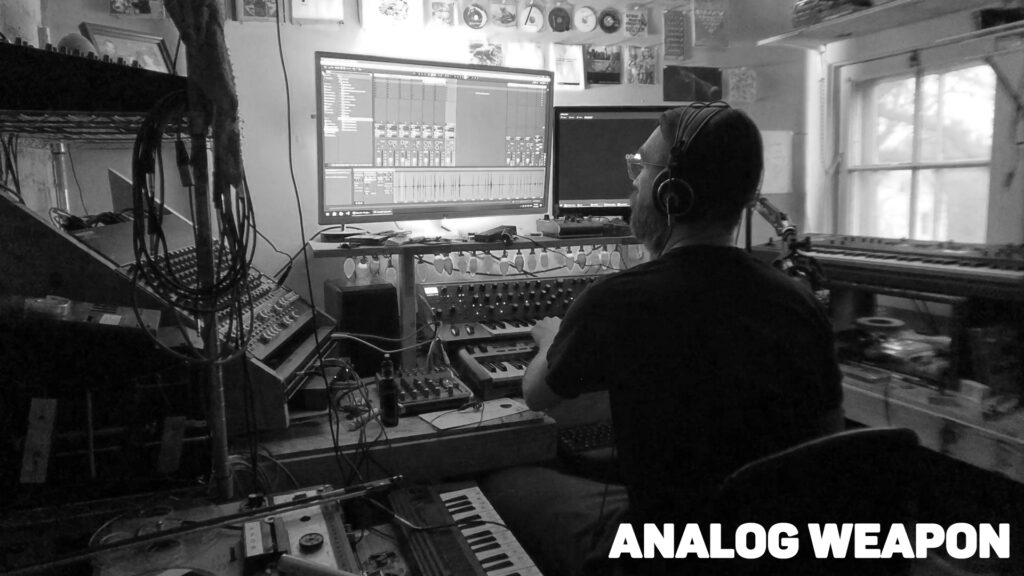 Andreij Rublev: Aside from pop music on the radio, I loved listening to unusual stuff from the age of 10, like classical music, singer-songwriters, etc. After that, I discovered metal, and from there I turned to noise and electronic music. Since then, I have never left the wide world of experimental music. There are many more people in this world than you can imagine. Pop and mainstream music are just a rather small part of the musical world.

Foot: I’ve always been into experimental music, as my dad got me into listening to artists like Frank Zappa at an early age. I was also inspired by people on the Magpie Pirates Discord server to try different things.

Hors Sujet: The desire to explore things that astonished me every time, and the willingness to learn new ways of producing sounds. I can clearly say that the drum solo from “Silly Sally” by Sweet Smoke had a huge impact on me as a kid, as well as most of the things my parents were listening to. After having a Grindcore band when I was a drummer during my youth, I decided to start Hors Sujet as a way of drawing my dreams into music. Throughout the years, I stayed independent and found an alternative way of doing things (even now with my handcrafted effect pedals/synth project), because I loved how growing up as an adult was feeding my artistic field, and vice versa.

What gear do you use to perform your music?

Analog Weapon: The core of my setup is my computer running Ableton. I use a lot of field recordings. I also have most of my effects and instruments in there too. Outside of the computer, I use a Moog Sub 37, tape players, and various circuit bent things.

Andreij Rublev: I play mainly mixers which I convert in a sound generator with a technique called “no input.” I also play more common instruments like synthesizers, string instruments and live electronics.

Foot: My guitars include a Fender Jazzmaster and some Part-o-casters I built. I also use a Tascam 414 with tape loops, a Bastl Instruments MicroGranny [a monophonic granular sampler]. I have lots and lots of pedals (some favorites are the Line 6 DL4, Count To Five, and Cooper Effects Outward ). Some pedals are also built by me.

Hors Sujet: I play a Jazzmaster, a Fender Pawnshop Jaguarillo, and a cheap guitar for unconventional tunings. For the tape/toys/synth part I’ve got two Tascam 414’s for 4-tracks tape loops, multiple Sony Walkmans, micro cassette players, two reel-to-reel players for longer tape loops, along with a Casio SK1 for the synths part, some samplers (Korg Kaoss pad, TC Electronic Ditto X4, a Microgranny, and a lo-fi phone sampler that I have built), and a lot of guitar pedals (some that I’ve built).

Do you perform live as an individual? Where?

Andreij Rublev: I perform live with my solo project Andreij Rublev. Most of the time I play in pretty small venues, pubs, festivals, and so on.

Foot: I haven’t had the chance to play locally, but I live stream on my YouTube channel regularly. 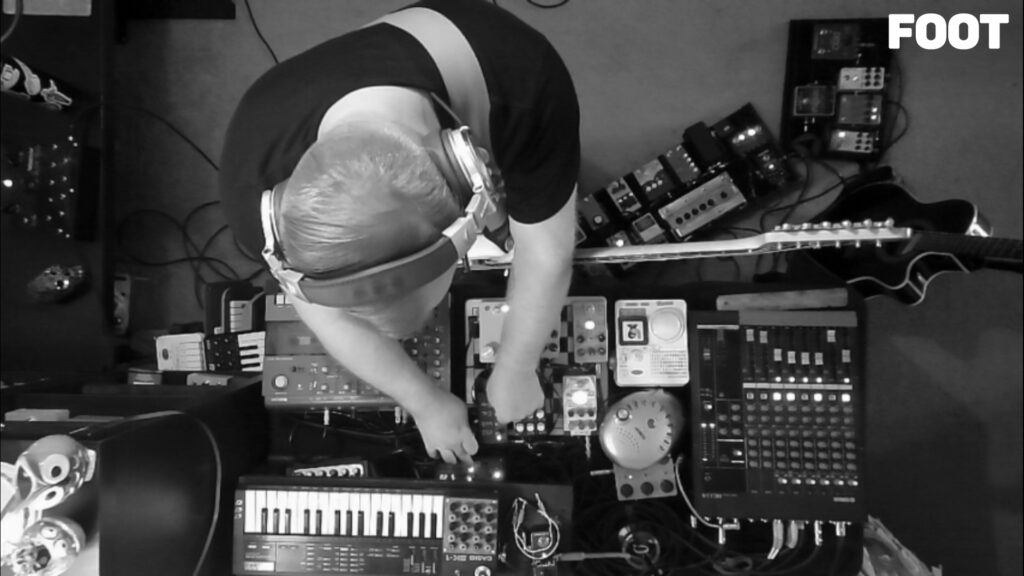 Hors Sujet: I perform live most of the time in my current city, Toulouse (France), as a solo artist when playing for cine-concerts and contemporary dance plays. I also perform live as Hors Sujet, with video, in bars and artistic venues. Lately I have been livestreaming my performances on YouTube.

How did you meet the others?

Andreij Rublev: I met them in the Discord server of the Magpie Pirates, just by chatting about random topics, or listening to their music and then contacting them. We have never met in person, unfortunately.

Hors Sujet: We all started to talk to each other online, after a couple of collaborations on different projects we decided to perform as a quartet for Parallel.

Who started Magpie Pirates, when did it start and what is it?

Andreij Rublev: The Magpie Pirates was started by Simon the Magpie in January 2018 as a Discord server. It’s a community which hosts a lot of people (actually there are 2000 users), runs continuous collaborations and is a place to share knowledge about music, art, and the creative process in general. It’s goal is to enhance creativity. 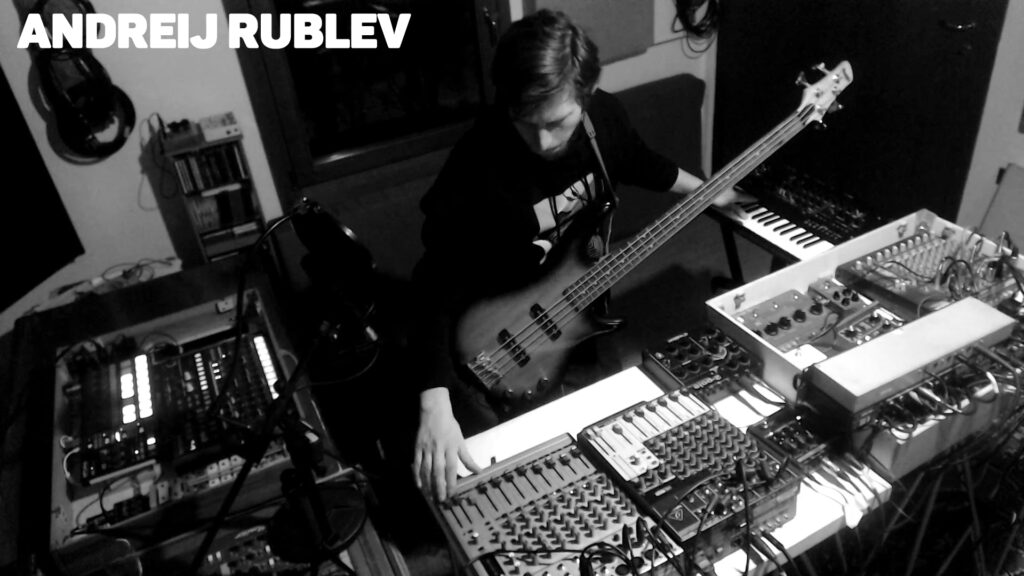 When did you start playing together?

Andreij Rublev: We started the Parallel project in November 2019 from an idea of Florent.

Hors Sujet: Originally, we wanted to have a long-distance livestream project. The goal was to have a few rehearsals to see if we could overcome the issues you encounter while livestreaming. After running into some technical online issues, we decided to leave the livestreamed performance aside, and focus on a 4-track album, which consists of  the four recorded sessions.

How do you set up the session?

Andreij Rublev: Our music is heavily based on improvisation. For this first release we created a simple but efficient structure, which gave us all the space and freedom for experimentation. First, we decided the note progression and time window for each one of them. We each watched a timer and used it as a reference point during the flow of the improvisation. Then we decided on a date for our recording session. Some of us played during the night and some during the day, but all in the same moment. After connecting all of my stuff to my soundcard, we started a voice call on Discord, which is the way we listen to each other. Everyone is recording locally both audio and video. We use the call just as a monitoring system. Then we collect all the recordings and they are merged together by Florent, who mixes the audio and edits the videos.

Analog Weapon: Since we were recording video along with audio, the software OBS  was a useful tool. Using that, I could record the stereo output from Ableton (all outboard gear runs into it as well). That means I don’t need to be recording in Ableton, which makes performance easier. I use a mixer to route everything. In order to have low latency in Ableton, I use ASIO, which means I need to have two audio interfaces: One for Ableton and one for sending audio to OBS and Discord.

Foot: My music setup is my guitar and table top rig running through a Yamaha mixer into my Focusrite interface.

Hors Sujet: We agreed on a day that could fit everyone (that wasn’t easy most of the time because of time zone differences), then made a call on Discord once everybody had webcams/cameras set up. As I mentioned above, it was originally meant to be a livestream performance, so it has a very raw and homemade touch that we decided to keep.

How do you combine video and audio?

Hors Sujet: Everyone had OBS (free and open-source software for video recording and live streaming) running with the same settings, so after each session we just had to share the audio and video files, then go through a mix, edit and master process of everything. Of course, multiple cameras and multiple sound sources means we had to make a countdown and a clap for the four of us to be synchronized.

What are the future plans for Parallel Project and for Magpie Pirates?

Andreij Rublev: We are going to explore more technical stuff to improve the quality of our sessions and for developing this idea of a long-distance collaboration even in a live situation.

Analog Weapon: Hopefully something involving being outside, because being inside is getting really old.

Foot: The original plan for Parallel was to set it up as a four-person live stream performance, but we ran into some issues with that. That being said, we haven’t given up on doing that; we just need to do some research and testing. I feel like this was a huge success, and can’t wait to find more ways to innovate on what we’ve done. As for the server that is kind of up to them, but part of our goal with Parallel was to show people that something like this is possible in hopes that they might try and do it too.

Hors Sujet: Now that we know that we can play along even with over 8000 miles between us, a lot of possibilities are open. We are good friends with a good musical relationship, so we’ll have to decide which projects can be done together and would fit our common taste. 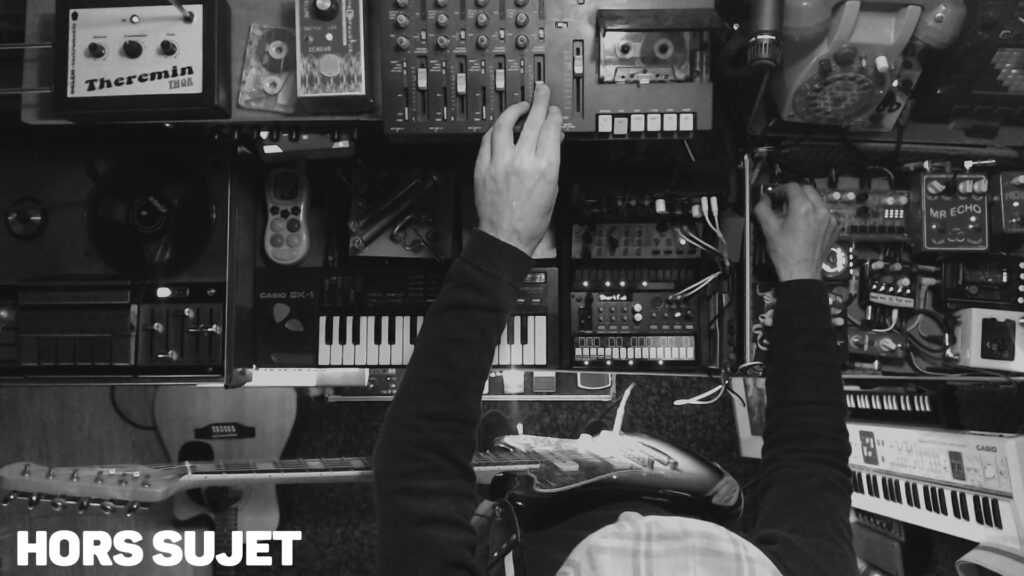 And of course, you can reach the Magpie Pirates community by joining Discord:    Or, go to the YouTube channel to watch our sessions.

Hors Sujet: Thank you for giving us this time to talk about our project. We will release four sessions in total on the Magpie Pirates YouTube channel, and  release the whole thing as an album on Bandcamp, so stick around. I would personally like to thank of course my noisy and lovely friends Andrea, Kevin and Nic for their involvement in this project, and also send a big thank you to Simon, who created a Discord server years ago that helped a lot of people to learn new ways of doing things and meet other people around the world, which allows projects like this one to happen.