A recent 1k Session features session impresario Tim Motzer and Touch Guitarist Markus Reuter performing a few solo improvisations each and then a series of duets. We got them to fill Guitar Moderne readers in on their gear and methods for this amazing show. 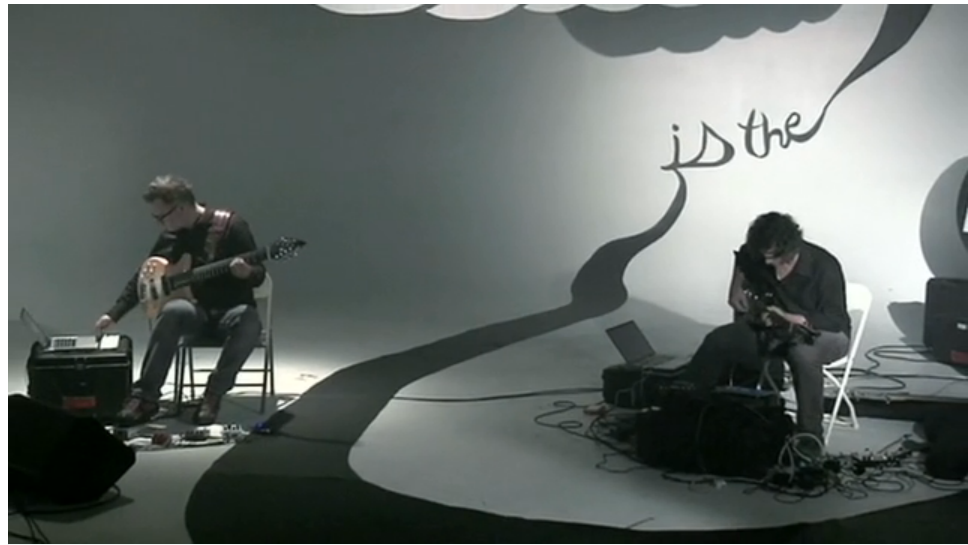 What pedals are you using these days?

My pedal board is always changing for various reasons but with a few mainstays. For solo concerts, Instant Takemitsu, and the 1k Session with Markus, I am using the same rig. Starting with a 2 in/1 out switcher that allows for a guitar and iPad to be plugged in through my effect chain. From there an Ernie Ball Volume pedal goes into a Digitech Whammy, then through an Eventide PitchFactor, into a Guyatone Overdrive driving an Ibanez Smashbox, into a Zvex Fuzzfactory, through a Guyatone Delay. The Guyatone Delay goes to a Line 6 DL4, and then into a Pigtronix Infinity looper, finally into an Eventide Space that goes stereo out to a PA or two amps.

After a Gong show at Nearfest a few years back, Theo Travis told me how he’d been using two Line 6 loopers, and sometimes three, working with Robert Fripp. I started experimenting with two and three loopers. Still love the DL4—a total intuitive classic—but the Infinity is moving me into a new realm. It allows saving loops, synchronized looping, aux out to drummer monitor (which is amazing), two discreet inputs, extremely long looping time, reverse, and soon to have 1/2/double speed options. I use this pedal all the time now along with my Line 6.

How are you incorporating the iPad into the chain?

There are a few ways to incorporate it. What I am doing is using the internal mic inside the iPad to capture audio on the fly, and then route it back through my pedal board. I am not using it in line for the moment. Dino J.A. Deane hipped me to a really amazing app called Samplr.  So I’ve been utilizing this quite a bit lately, capturing my audio and playing this unit and finding new sounds that can then be mutated, distorted, looped, harmonized, etc. with my pedals. There is also stuff you can do in Samplr itself: choose just a part of the wave, pitch it up or down up to three octaves, filter, scrub—all right on the touch screen of the iPad.

Are you using an amp or going direct?

For the project with Markus, we both went direct into the PA. With Instant Takemitsu, I use small tube amps (which are miked up then sent to the PA)—most recently a ZT Club, and an old Fender Vibro Champ.

Is the laptop still just for recording?

How do you conceive your role when interacting with Markus?

We have been playing together on and off since 2008. The key for us is to listen and to play freely. For me, that’s the challenge and you have to listen very deeply. As we listen, interaction happens, and impulse. We share some vocabulary and are a good match because we approach things from different perspectives. It is a very satisfying exploration, as we often travel into unmarked territory. I listen for a narrative or story in the music, although sometimes I hear the story on playback. There is usually an arc that happens when we play and it tells the listener something. Sometimes we’ll throw in a rule, like play Messiaen mode #4, or descend chromatically. For this 1k Sessions, we just played. I feel like music comes though us, and you cannot deny it. It’s what comes out. Sid Smith, King Crimson’s biographer, recently called us “Two of A Perfect Pair.”  We have an amazing chemistry together. So we hope to do more concerts in the upcoming years around the world.

What pedals are you using?

For this particular performance I used my Touch Guitars U8 Deluxe into the Analogman BiComprossor, to Subdecay Flying Tomato Fuzz, to Dunlop Volume Pedal, then to Red Panda Particle and last but not least the Jack Deville Electronics Dark Echo.

How are you incorporating the laptop into the chain?

The signal from the guitar via the pedals goes straight into the laptop via a Focusrite Saffire 6 Interface.

What plugins are you using?

I’m running Ableton Live 9 without any external plugins. I’ve programmed a setup that runs automated feedback circuits on top of the input channel, two looper channels, and two effects channels (reverb and grain delay pitch shifting). I have several sets of automation—from slow fades to total glitch, and rhythmic rides that I can combine in any way I wish. What is sampled and played back at me is largely unpredictable so the laptop becomes a real partner in live performance.

What controller are you using?

Korg nanoKONTROL2, which I mostly use to mix the channels in Ableton Live and to control the levels of the feedback circuits. There’s also Delay, Reverb and Pitch Shifting (a Major 2nd interval) on the input channel, the levels of which I can also access from the nanoKONTROL.

Are you using an amp or going direct?

Going direct works best for me in a context like this. First of all, my instrument sounds amazing direct, and when melding electronics with guitar signals it’s more easily handled by a PA. When a guitar amp is involved the overall volume has to come up considerably for it all to gel, and that’s mostly impractical.

How do you conceive your role when interacting with Tim?

No need to conceive anything when playing with Tim. We simply listen and respond to each other. The coolest thing for me still is that not even once did I consider pitch playing this 90-minute concert with Tim. I was just letting my hands go where ever they want.