If I was still living in New York I would be at many of these. If you live there, or can get there, this should be an amazing run from September 8-13, 2015. I saw Marco Cappelli at The Stone back in 2012 when he was part of a Derek Bailey Tribute. His command of the instrument was matched only by his improvisational daring. Now he is back at tThe Stone for a residency.

Schedule for Marco Cappelli’s Residency at The Stone:

In Phase III music skirts and shifts along the edges of free improvisation, deep groove and New Music. It reflects Jim Pugliese’s ongoing quest to explore the powerful, enlightening and spiritual secrets of drumming and is inspired by recent association and work with Nii Tettey Tetteh, master musician from Ghana and the study of the spiritual songs of the Mbira Dzavadzimu from Zimbabwe.

Two combinations of duo with guitar joining their creativity to explore a repertoire of songs and original composition with a simple commitment: every deviance through improvisation is possible and no electronic device is admitted. Eventually, an improvised trio will conclude this set.

“IDR – Italian Doc Remix” is the result of the artistic exchange between Marco Cappelli and Jim Pugliese, highlighting their mutual reverence for the villages’ ritual music of the region of Naples. It sounds like an imaginary Albert Ayler’s trip to South Italy: impossible to fit in any conventional standard. The band welcomes as special guests Toronto-based singer Francesco Pellegrino, a specialist of the South Italian traditional singing and guitarist Marc Ribot. 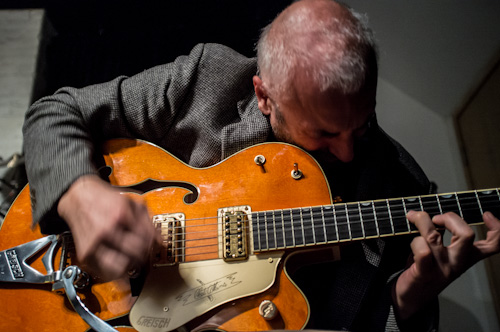 Around Sir B. Britten

Two years ago, in honor of Benjamin Britten’s centennial, Underwolf Records released Rosalie Kaplan and Marco Cappelli’s EP of their arrangements of Britten’s cycle “Songs from the Chinese” for amplified processed voice and electric guitar. Tonight the duo will be

joined by saxophonist Noah Kaplan and drummer Marco Käppeli, to celebrate the composer’s work and forge a new approach to its performance in the 21st century.

Born a year ago in occasion of a memorable gig at Nublu in NYC, Nublast grooves between fragments of composition and improvisation in a continuous psychedelic set of music. Sound ideas proposed by Shoko Nagai, Marco Cappelli and Avram Fefer, and elaborated by the band altogether.

In The Shadow Of No Towers after Art Spiegelman

A 50-minute animation published as a DVD by Mode Records in 2011, as a memorial for the tenth anniversary of September 11th. The projection is dedicated to Roberto Pellegrini: 1960-2014.

The Kraken by Gaetano Costa

A doctor performing an autopsy on the enormous creature’s body found dead on the beach, finds out that what he is examining is actually the cadaver of a contemporary South Italian town. A deep reflection about all that is connected with the word internationally known as “mafia.”

Guitarist Marc Ribot had this to say: “MC Acoustic Trio is what happens when you cross one of Europe’s best and brightest new music classical guitarists/composers with the best of New York’s avant jazz/improv scene. The sonics recall the lusciousness of Ralph Towner’s ECM work, but the compositional /improvisational smarts and depth of Marco’s classical chops and background on this recording are unlike anything I’ve heard.”

Dedalo was formed in the early years of the new millennium by guitarists Domenico Caliri and Marco Cappelli, at the time they were both in the band of the famous jazz trumpet player Enrico Rava. Their reunion tonight here in New York brings back to life this amazing guitar quartet – featuring two classical and two electric guitars – with a new set of original compositions by the band members. 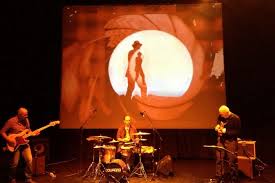 “Go: Organic Guitar Orchestra” is the last version of Adam Rudolph’s vision of a kind of future orchestra: an original orchestral concept of world music improvisation he started in 2001. The music is composed as thematic material that provides a spontaneous orchestral context and inspiration for improvisational dialogue. Featuring some of the best guitarists active in the NYC music scene. 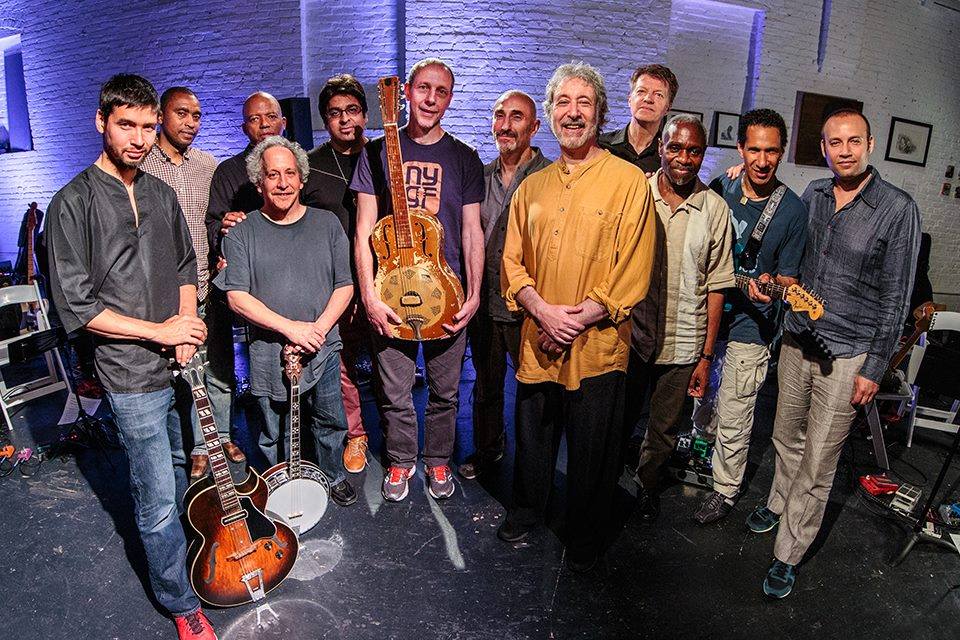 The internationally-acclaimed contemporary music Ensemble Dissonanzen from Naples, Italy performing their Man Ray Movies project, with improvisations on music by Erik Satie. Pretend to be in an avant-garde movie theater located in Paris around 1920.