Most guitarists struggle their whole lives to master six-strings, maybe ten or 12. Unwilling to stop there, Kevin Kastning has extended his mastery to instruments fitted with 30 strings and beyond.

While at Berklee in Boston, Kastning studied privately with Pat Metheny. The Massachusetts resident has composed over 200 works for various solo and chamber group instrumentations. On his label,  Greydisc Records, he has issued albums with Alex De Grassi, Michael Manring, and Mark Wingfield.

Kastning is a member of a small musical club comprised of players as at home with classical compostition as they are with free improvisation.

As for the type of music, I don’t know if I can categorize it.  I come from a classical background, and spent a few years in a jazz phase.  I believe that my guitar work is very heavily influenced by my also being a classical composer. I usually find that I’m conceptualizing what I’m doing at any moment as an entire composition. 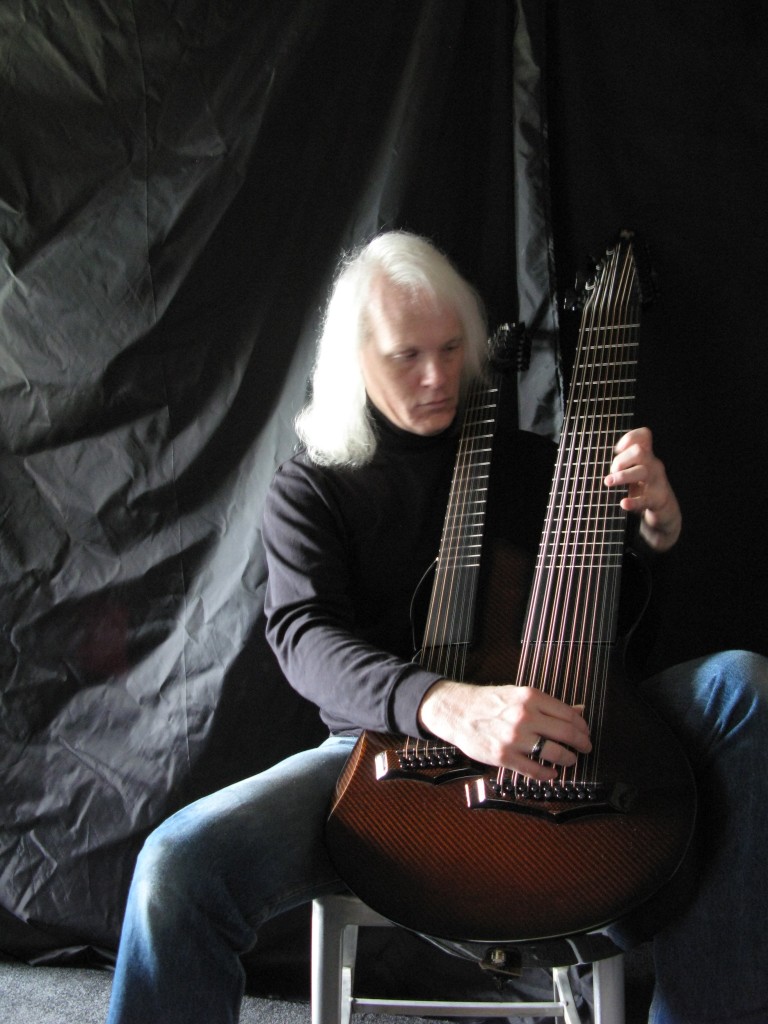 I don’t know if I’d define it as experimental, but it’s certainly non-mainstream. It wasn’t intentional; it was an evolutionary process spread over a number of years. I never had the thought: “I’m going to go in an experimental direction.”  I merely allowed the music to develop and evolve organically as it wanted to; I still do.  As a composer, I’ve always been drawn to 20th-century composers such as Bartok, the composers of the Second Viennese School, Elliott Carter, Shostakovich, Feldman, Ives, and Xenakis.  Again, I never consciously set out in this direction, but I suspect with those guys as influences, it was bound to happen. My music life has two branches, really: composing and the guitar. By composing, I don’t mean for guitar; I mean in a more classical direction: string quartets, piano sonatas, chamber pieces, and orchestral works. The guitar work is everything else. I don’t think my composing sounds anything like my guitar work; it’s really two separate worlds. Yet, I suspect that the influence of these composers is present in every note I play; whether or not I’m consciously aware of it.

I don’t know if I agree with the word “inspire.”  To me it implies the requirement of external stimuli to create your own work, and that’s not the case. I listen to other music to educate and inform. That said, the composers I just mentioned for certain; I listen much more to composers than to performers. There are also many early music composers to whom I listen (early music loosely defined as music between 1000 AD and 1600 AD). While it might seem incongruous that I listen to Xenakis from the 20th century, and Machaut from the 14th century, there’s still a connection there. The early music composers were full of the new and experimental in their day. This was a very exciting time in music: many new developments, including the dawn of mensural notation and polyphony. Plus early music has a purity of line and a kind of clarity that only exists in that genre. It’s stunningly beautiful and I think I’m addicted to it.

I was never that much of a fan of Haydn until I started working with the 30-string. Now I listen to his string quartets all the time; I hear polyphonic elements in them that map quite well to the 30-string, and study and practice from the scores. I feel as if some of the secrets of the 30-string are slowly being revealed to me by listening to the Haydn string quartets.

In the guitar world, there’s not many to whom I listen; I’ve always been drawn to composers rather than guitarists. That said, I always have a soft spot for Ralph Towner. I am a huge fan of my partner Sandor Szabo; he never ceases to challenge and inspire. Sandor doesn’t sound like any guitarist I’ve ever heard. For electric guitarists, I like Allan Holdsworth and my partner Mark Wingfield.  They’ve both achieved something near impossible on electric guitar: a unique and original voice.

In the lute realm, I listen to a lot of Silvius Leopold Weiss and various late Renaissance/early Baroque composers. Weiss really expanded the range of the lute; he had to go to luthiers and get extra courses added and designed new lutes with additional courses so he could realize his music. I feel a connection to him and his music for that and other reasons.  For lutenists, I like Robert Barto, Paul O’Dette, and Hopkinson Smith.  With the lute having more courses than guitar, as do my instruments, I feel a kind of connection to it. I’d never aspire to be a lutenist, but what a beautiful and soulful and moving instrument.

I also draw much from other sources, such as nature, art, literature.

Tremendous work and a lot of time. Continually pushing myself by finding things that I can’t do, learning them, and incorporating them into my playing. A regimented and uncompromising practicing schedule. Not being afraid of extending the range of the instrument.  Playing the instruments I play, or perhaps I should say attempting to play these instruments, there’s nothing in the way of role models or reference materials such as exists within the 6-string world.  I’m also not entirely sure that I have a style, or if I do, it’s continually evolving.

Harmonic density and melodic angularity. Elements of nature. Multi-dimensionality. Abstractions.  Aural paintings. Emotions that can’t be conveyed or made tangible in any other way. Orchestral textures and depth by way of the 30-string and the 17- and 16-string instruments

Being an acoustic guitarist, I don’t use any amps or plugins.  I am very particular about microphone selection and placement, though. I use various mics by Gefell, Neumann, AKG, and the Shure KSM series. Preamps are by Millennia and Sytek. The only effect in the mix process is the Bricasti M7: it’s the most natural digital reverb I’ve ever heard. None of my records have any compression, limiting, EQ, or other effects.

That’s a great question. The argument could be made that everything I do is playing live, since in the studio it’s all done in a single take with no overdubs. I do far more studio recording than performing live concerts, and most of the concerts I do are in Europe. Though I did just do a concert in New York City last week with Mark Wingfield. There’s an intensity and an immediacy in a concert setting that only seems to exist in that realm. Recording is much more of a compositional place for me; I know many artists get nervous in the studio, but I find recording to be a very peaceful and meditative process. I probably enjoy both live and studio work for different reasons, but I think I gravitate more toward recording.

Honestly, I don’t know how to build up an audience; I suspect that my audience has found me over time. I just focus on realizing the music that I hear internally as accurately as possible.  I believe that if an artist remains true to themselves, the audience will be there. I’ve also been very fortunate in that magazines such as Guitar Player, Acoustic Guitar, Progression, FAME, The Perfect Sound, Music Web Express, and of course Guitar Moderne have taken an interest in my work, and I’m sure that helps, too.

Ketil Bjørnstad: he is a Norwegian pianist and composer, and I am a fan of his work. He has a unique voice as a composer and pianist; I hear something in his playing wherein I think he and I would connect very well. I’ve been blessed with collaborators in that I’ve gotten to work with some amazing people, and have some new projects coming up with some artists that I’ve long admired.

There are two new albums that were just released in July and August of this year. The first is the new record with woodwinds musician Carl Clements, entitled “Nowhere, Now Here.” The second is my latest with British electric guitarist Mark Wingfield, entitled “Dark Sonatas.”  I use the new 30-string Contra-Soprano guitar on both of these.  Both are available on CD and mp3 at amazon, iTunes, CDBaby, and all the usual download stores. Upcoming releases confirmed for 2014 are new albums with Hungarian guitarist Sandor Szabo,  Carl Clements, Mark Wingfield, and a solo album.

Instrument projects in the works are a 20-string classical from Daniel Roberts Stringworks, and the next Kevin Kastning Signature instrument from Emerald Guitars.  It will be another double-course doubleneck, but will have more than 30 strings.