In the early part of the Millennium I had a column called “Super Unknown” in the now defunct Guitar One magazine. I was lucky enough to have free reign to write about any guitarists I thought under recognized. I tried, even then, to expose readers to modern guitarists like, Eivind Aarset, Knox Chandler, Gerry Leonard, G.E. Stinson and others. Though not as experimental as some of the aforementioned, Alan Murphy was unique in bringing fusion level chops and noises as well as notes to subvert the soul pop music of Go West. Unfortunately, Murphy had already died when I began my column, but I got to interview his band mate in Go West, drummer Tony Beard. Here is that piece as well as video of this major guitar talent.

It is now [almost thirty years] since the world lost a brilliant musician in the person of Alan Murphy. Imagine if you will, the chops and tone of Allan Holdsworth, combined with the melodic sense of Larry Carlton, then throw in the go-for-broke attitude of Jeff Beck (a fan), and you get the magnitude of the loss. Tony Beard, drummer for guitar heroes like Beck and Peter Frampton— and no mean guitarist himself—says, “He was all about melody; my reference for him was ‘Allan Gilmour’—he had the melodic aspect of [Dave Gilmour] and the chops of Holdsworth.” Beard played with Murphy in Go West, as well as an instrumental band called SFX. SFX doubled as “The Fender Hot Squad” for Fender Musical Instruments in England, doing clinics throughout the UK, where Murphy would wrest alternately demonic and divine tones out of a Squire Strat and the Paul Rivera designed Fender Super Champ. A typical Murphy solo would begin with a whammy dive, deliver some heartbreakingly beautiful melody and culminate with a blistering run.
A gig with British Blues legend, Long John Baldry led to an audition for Kate Bush who liked his “whale noises” and promptly hired him. SFX fans Peter Cox and Richard Drummie invited Murphy to join their band, Go West, a nominal pop group, but with killer players. Murphy was just achieving recognition for his instrumental prowess with Level 42 when he lost his battle with Aids in 1989. Beard laments, “It is only in later years that you realize what talent this guy had. I just think he would have been a force to reckon with if he had been lucky enough to stay around.”

Here is an edited bio from Wikipedia:

Alan Murphy’s first musical group was called Blackmass, named in tribute to Deep Purple guitarist Ritchie Blackmore, an early influence. It existed for about two years until some of the band’s equipment was stolen and the group disbanded.

SFX was an instrumental jazz-rock fusion band that originated from the covers band The Stapleton Allstars, morphing into SFX after creating a set of original instrumental fusion tunes. It featured Murphy and fellow luminaries of the session world, Felix Krish on bass, Tony Beard on drums and Richard Cottle on keyboards. They played the occasionally interrupted residency at the Cricketers pub, near The Oval cricket ground. The band recorded an album that was subsequently released after Murphy’s death.

Murphy performed with Fusion Orchestra for the better part of 1975. In 1982 he handled onstage guitar duties for London-based New Wave vocalist Zaine Griff (originally from New Zealand), performing music that was in many ways a stylistic precursor to the Go West sound that he would help forge several years later.

In 1984, Murphy worked on the album Cold in a Warm Climate with the band Paparazzi, becoming a member in preparation for a major European tour. When Paparazzi unexpectedly dissolved over internal disagreements and managerial problems, Murphy was recruited to play on the debut Go West album in 1985, shortly thereafter becoming an official member and a key component in the band’s sound.

Murphy was enlisted to play on the first and only Kate Bush tour of the Europe and UK (1979). Both a live video and EP were released with material taken from this tour. He also contributed to her albums Never for Ever, The Dreaming, Hounds of Love, The Sensual World, and the single “Rocket Man.”

In 1988, Murphy was asked to replace Level 42 guitarist Boon Gould, and recorded with the band on their Staring at the Sun album. A live album was recorded during this period, Live at Wembley. This was one of the last major projects that Murphy worked on before his death.

During 1989 Murphy played at the British Music Fair, but it was evident from his appearance that he was not well. On October 19,1989, weakened by the AIDS virus, Murphy died of pneumonia in Westminster City Hospital, near his old school. He had kept the facts of his illness a secret even from his colleagues and bandmates. 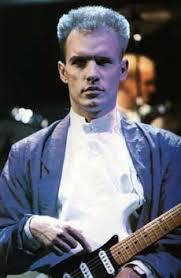 In the music video for Kate Bush’s version of “Rocket Man,” released as part of the 1991 Two Rooms: Celebrating the Songs of Elton John & Bernie Taupin tribute album, she performs with her band but there is an empty chair, a guitar, and a candle where Murphy would have been and cross-faded footage of him playing in the closing choruses. “This is one of the last tracks that he did with us and it’s particularly nice for me to feel that it’s not only keeping him alive, but I know he would be really thrilled to know that [the single] was doing so well,” Bush told BBC Radio 1, “And it’s nice for all of us that loved Al to know that he can be a part of this now.”

Bush’s song “Moments Of Pleasure” referenced Murphy and several other people dear to her who had died.