It might be something in the water but Scandinavian musicians don’t merely cross musical boundaries, they flat out refuse to recognize their existence. Anyone familiar with Terje Rypdal, Bugge Wesseltoft, Nils Petter Molvaer, Eivind Aarset, and yes, Yngwie Malmsteen is aware that they all comfortably straddle genres from metal to classical, jazz to hip-hop, free improv to folk without batting an eye.
Norwegian guitarist Knut Værnes is solidly in this tradition; over more than a decade and half a dozen solo records he has revealed a mastery of Nordic ambience, whammy-bar fusion, Scofield-style post-bop, and a host of other musical metiers—sometimes all on the same CD. As an outlet for his various visions he created the Curling Legs label which now comprises well over one hundred titles. Many of those recordings are CDs by other guitarists including Bjørn Klakegg, who makes his own instruments and creates pastoral musical landscapes of surprising depth, and Tellef Øgrim, a fretless guitarist offering postmodern jazz-fusion.

I asked Værnes about his influences, label, and recording, 4G, one of the great all-guitar-all-the-time festivals featuring four of Scandinavia’s finest fret board wranglers. 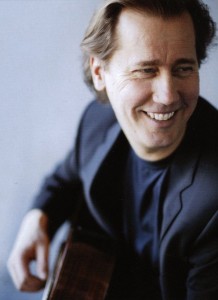 What is your background as a guitarist?

I started as a blues/rock-player in the 60´s, copying the leading guitarists of the era: Eric Clapton, Peter Green, Jeff Beck, Hendrix etc. In the early 70´s I was caught by the jazz/rock fusion that emerged (Miles Davis’ Bitches Brew, Mahavishnu etc.) and later the ECM-style. I played in many different bands, and did 3 years of music-studies at the University of Oslo in the late 70´s. I have played professionally since 1981, as a session-musician and bandleader.

What made you decide to start a label?

Primarily to put out my own records, but also to release music that I thought deserved to be put out and that no one else wanted to release.

First I have to like the music. I also think it is an advantage to like the artist as a person, especially when we sign them for more than one album. The artist also needs to be touring to promote their music and releases. It is an advantage if they are self-contained in terms of managing their own career and booking, as Curling Legs is only a record label.

What, specifically do you look for in the guitarists that you sign?

I look for an individual style of expression, both musically and soundwise. But technical skills are also important since good technique is a requirement for variation and development in the long run.

Your label features many different kinds of music, mostly within the jazz field, but also some pop. Why did you decide to do this as opposed to specializing for example in guitar jazz or nü-jazz?

I enjoy all music as long as it is ‘good’ and creative. “I did not want Curling Legs to be an outlet for pop/rock since there are so many other labels that releases this kind of music. I have been interested in jazz since I was a teenager and have landed on jazz as a main focus for the label.

Can you tell us something about the guitarists on 4G and why you chose them?

I have always enjoyed playing with other guitarists. And all guitarists on the 4G album have played with me and each other at one time or another. We are good friends both personally and musically and I quite simply wanted us to make some nice music together that was a little different from what we do as individuals in our own settings.
The process of putting together 4G was quite long as all of the musicians were pretty busy. I think I got the idea around 1997. And in August 1998 we all flew up to Frodes’ studio on the west coast of Norway to check out if it was a good idea or not to record four distinctive guitarists. We spent 3 days in his studio just playing around with different ideas and finding our different roles in the foursome. We agreed before we started that we did not want to include any traditional rhythm-section.

How did you go about deciding who would play what on 4G?

The idea of putting four guitarists together was quite unusual in itself, and I figured that if it was going to happen, we had to take on different roles. For instance, one would have to play a bass-like role, one or two would have to play rhythm guitar and one would play the lead melody. For solos we had to agree on each tune. Even for percussion we found it would be cool to have one of us play some percussion sounds on the guitar.
We brought maybe 20 different guitars to the studio and worked on and recorded different arrangements. Some tunes were well planned beforehand, but others were worked out in the studio.
Typically, Bjørn would play the melody with his specially made finger bottlenecks (i.e. a metal bottleneck on each fingertip). Knut Reiersrud would play “bass” on his Danelectro double neck, Frode would play [ambient sounds] and I would play chords and solo-fills.
Knut Reiersrud is also into traditional Norwegian folk music, he plays fiddle on one of the tunes. I played a custom-made 1983 ESP solid-body and a 1966 Gibson 335. My acoustic instruments are a hand-made Yamaha steel string from 1977, and a Rodriquez Model D nylon stringed guitar. I used a Boss GL100 pre-amp and Lexicon effect processor with a Boss volume-pedal directly into the mixing-console. Frode plays Fender, Gretsch or Schecter electrics and Martin acoustics, running the electrics through a Matchless combo and various effects, typically a Boss digital delay, wah-wah and volume pedals. Bjørn recorded directly into the mixing console through his arsenal of TC-electronic gear. In addition Bjørn has invented lots of instruments that were used, like a tuned bicycle wheel with guitar pickups and nylon brushes to create wind-effects. Knut Reiersrud recorded directly into the mixing console when playing electric guitars, typically Fender. He also played a Martin acoustic and his collection of stringed instruments from around the world (oud, sitar etc.). We all used condenser microphones when playing acoustic guitars, except for my Godin ‘Telecaster’ acoustic, which was recorded directly.

What is the best way for people in the US to purchase your label’s records?

Cadence Distribution in Chicago is representing our CD sales in the US. They are also available on iTunes and www.musiconline.no

A Rough Guide to Curling Legs:
4G is a good place to start and is available on iTunes. Of the label owner’s extensive output, Super Duper is a way to experience Værnes’ chops and versatility. Bjørn Klakegg’s A Day With No Plans At All is a wonderland of guitar textures and emotive playing.
If more aggressive music is your bag, Tellef Øgrim’s Wagon 8 will shake up your concept of what is possible on fretless guitar. The three Ab und Zu records feature some early work by Eivind Aarset in an incredibly eclectic pop setting, with gorgeous vocals by his wife, Anne-Marie Giortz. Gunnar Andreas Berg’s Music Machine will make Jeff Beck fans very happy

2 thoughts on “Fretting Amongst the Fjords: An Interview with Curling Legs founder Knut Værnes”